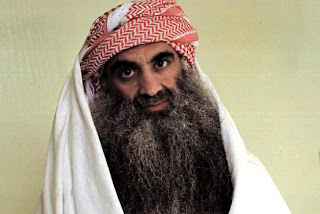 I think this is good news but I'm hesitant to get too excited just yet. News tonight is that The House of Obama has pulled the plug on holding the KSM terror trial in NYC. As opposition to the event picked up steam this week it seems that the pressure was too much to bear and now the word is that the plan is dead:

The Obama administration Friday abandoned plans to try 9/11 mastermind Khalid Sheikh Mohammed in Manhattan, following objections from New York Mayor Michael Bloomberg, a senior administration official said. He will be tried domestically, but officials have not decided where. Options for the trial include a military base.
Other options may also include other domestic cities for all we know.
The New York Times reports:

By Friday, Justice Department officials were studying other locations, focusing especially on military bases and prison complexes, and no obvious new choice had emerged.

Begging the obvious, but what's wrong with Gitmo?

And even more obvious, shouldn't this have all just stayed in the hands of the military in the first place?

Ever the cynic, Allahpundit wisely wonders:

Exit question: Did Obama trade this concession for any congressional votes about closing Gitmo and funding a new prison? Someone call Mitch McConnell, quick.

I'm wondering what kind of pressure Eric Holder is feeling these days. Everything we learn about the handling of the Christmas Day terrorist reveals even more clusterfarks than one could imagine. Now this.

But somehow I don't feel we can rest easy on this one just yet.

My readers will be popping-in for a visit, as it's linked at the Reaganite Republican…