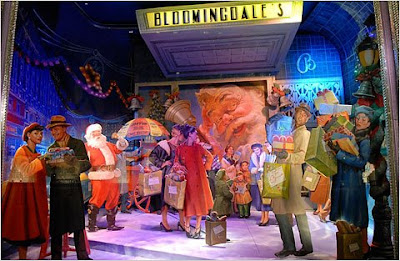 If I lived in New York one of my Christmas traditions would be to see all the wonderful shop windows. It's kind of like the Neiman Marcus Christmas catalog - each year you have to out-do yourself! I love this window from Bloomingdale's with its "pop-up card" theme. It's so nostalgic and Normal Rockwell-ish - I love it. 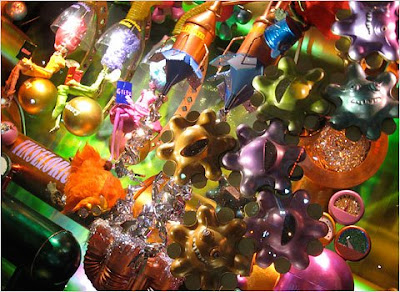 On the other hand, I love this festive Macy's window. The New York Times City Room blog describes it like this: "Every year Macy’s likes to do things that have never been done before. This year is no different. Mr. Olzewski, director of windows, wanted to give his windows a touch-screen effect. One window has controls that operate a claw that can pick up balls (similar to the prize-snatching claw in an arcade game)."

The creativity involved in all of these just blows my mind but I think it would be wonderful to have a job that involved such creativity. You just know they spend all year long designing and creating these windows for just this time of year! Fun! Check out the blog to see the others, including the fabulous gingerbread house window!
Posted by Pat Austin Becker at 7:42 PM