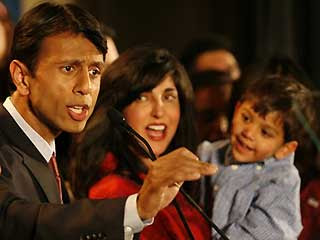 Since the last presidential campaign was not long enough for anyone, Republicans are already looking at 2012. Similarly, the Democrats did much the same thing after the 2004 election which, of course, helps tremendously when it comes to those things like fund raising. No question that the Democrats raised lots more capital than the Republicans in this past election!

So as Republicans regroup and try to figure out exactly where the party IS - are we centrist? are we conservative? are we left of center or right of center? - various names are already being bandied about as potential candidates. I've seen Newt's name come up as well as Mitt Romney.

And of course, Bobby Jindal. John McCain reportedly strongly considered Jindal as a running mate because of his health care expertise. It has also been said that Jindal asked not to be vetted as he wanted to stay in his current job as Governor of Louisiana. He has not yet served a full term. But many think Jindal might be "The One" - oh wait, that job is taken - Jindal might be the next golden child in the Republican party. The Future.

While I think Jindal certainly has potential, and I did strongly support him for governor, I'm not finished watching him to see what he can do. I like my candidates to have some experience (have you noticed?) and to have accomplished things. Jindal served as a congressman and did an admirable job. But so far as governor, I think the jury is still out as far as many Louisianians go.

Popular radio host Moon Griffon has not been able to get Jindal back on his program ever since Griffon asked him about his position on a pardon for convicted former Governor Edwin Edwards. Before he was elected Jindal was on Griffon's show frequently. Griffon often makes the point that Jindal is "out of the state campaigning" and not here "taking care of Louisiana."

What I know about Jindal is that early this summer our Louisiana legislators tried to vote themselves a huge pay raise. One of Jindal's main campaign platforms had been ethics and he stated specifically in his campaign literature that he would not allow legislators to vote themselves a pay raise; if any raise was approved then it should take place after the current legislative term; in other words, you couldn't vote for a pay raise for yourself.

So here comes this huge pay raise vote; these guys make between salary and per diem, about $30,000 (and this is a part-time job!) Their raise would have been effective immediately and would have raised them to over $50,000. Remember, at that time we were all struggling with five-dollar a gallon gasoline. The "effective immediately" part was a big deal because citizens were struggling and legislators were going to be pulling in 50k for a part-time job; exactly what Jindal had campaigned against.

He said he would not veto it. Said AGAIN he would not veto it. He said he would "not interfere" with legislative business and that they should police themselves. There was a huge outcry from the citizenry and recall petitions blossomed for legislators and for Jindal. I ripped my "I Voted For Bobby Jindal" bumper sticker off my car and sent it back to him. The "folks" were furious.

Everywhere Jindal went in the state he was greeted with protesters. One guy, photog

raphed and splashed in all the local papers, had a t-shirt with a knife drawn on his back with comments about Jindal breaking his campaign promises to the people.

In the end, and at the ninth hour, he finally called a press conference and said he would veto the raise. The point is that he had to be dragged kicking and screaming to do the right thing. Jindal made a lot of people doubt the sturdiness of his spine on that one. Rumors flew that he had made a deal with some powerful legislators that if he didn't veto the pay raise then they would work with him on some of his pet projects such as charter schools in New Orleans.

So, there are a lot of people in this state that still want to believe in Jindal. I think he COULD be a bright spot in the Republican party; he certainly is conservative. He has a lot of positives. But he lost the faith of a lot of people (and isn't winning many friends by boycotting Moon Griffon!).

I've heard the Romney/Jindal combo suggested already for 2012. Between Romney's economic smarts and Jindal's healthcare smarts and the combined conservatism of the two, it might not be a bad ticket. But Jindal needs to restore the love of a lot of his Louisiana base first!
Posted by Pat Austin Becker at 5:37 PM

Hi. Found you through twitter. Someone had referenced your Jindal article. Great write-up and blog, btw. I've subscribed.

As for Jindal. I really hope he can do well in Louisiana over the next 3 years, not only because I love Louisiana (grew up in Ringgold), but because I think if he can show improvement there, then it will be a testament of what he can do on the national level. Wow..long sentence there.

Anyway, I'm pulling for Jindal. I really like him. I understand the pay raise issue had some people worried, but at the end of the day, he "listened to the voters" and vetoed the raise.

Thanks for the comment! Glad to have a friendly voice here; I have a lot of political dissenters also. I love healthy debate but sometimes I get overwhelmed! :)

And you are right that "at the end of the day" Jindal did do the right thing. That's what encourages me about him. I'm almost willing to give him the benefit of the doubt here in that maybe he was hoping the legislators would recognize their folly and come around.

OH GOD!! I do not like Mitt Romney AT ALL. I've heard talk of him and Huckabee and they both make me want to cry!

As of right now, I think Newt on either side of a ticket with either Jindal, Palin, or Paul Ryan would be ideal.

I won't bore you with why and I'm not the biggest Newt fan (he was my congressman once up a time...and he went out of his way to flirt with my mother LOL), but I definitely do not think Romney is the answer...he can't pull it off.

Now that the election is out of the way, maybe a lot of politicians will get back to business and remember why we voted for them. Some have to remember that you have to govern the same as you promised when you asked for our votes. I think Jindal can do it, and I've been supportive of Romney. Lots can happen...and will.