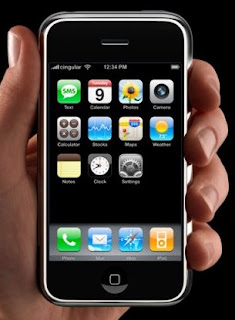 Ohmigod The Teenager bought an iPhone. He discarded his beloved BlackBerry Pearl without a second look and picked up an iPhone. And I love it.

I've always loved my iPod without question. I'm not such a tecchie person and when I got my iPod several years ago, I thought, "I'll never be able to do this." In fact, I didn't even get a cell phone until this past summer. I couldn't even work Steve's early edition Nokia. Once I got the iPod I saw the light. So simple. Good grief, what had I been waiting for?

That somehow opened a door and I got a laptop. Now, I've had issues with my laptop because it came with Vista which I HATE WITH A PASSION because it boots up so slowly and because it always asks permission to run a program even if you've already told it to run. Stupid. But I love the convenience of a laptop. I just want a better one.

And as I said, I finally got a cell phone this summer. It's not fancy - a simple Nokia flip phone. I still don't know how to everything it would do, but it does what I want.

The Teenager, on the other hand, is fearless with technology as most kids are. He started out with a Samsung slider phone. There were things about it he didn't like (ringtone issues) so he got a Nokia, like mine. Decided it wasn't cool enough and bought a BlackBerry Pearl (with his own money - I had to quit funding his tastes in technology a while back.) He loved his BlackBerry. Until the iPhone.

I finally got to touch the iPhone today because he couldn't figure out how to sync it with iTunes. It was simply an issue of deleting and reinstalling iTunes, which he could have done but I suspect did not want to take the time. By the time I had backed up everything on an external drive and then deleted everything (which reminds me - I guess I need to back up again now with the newer version...) it took a couple of hours.

While I was waiting, I played with the iPhone.

I lost my beloved Blackjack on Saturday when I sat on it :( and now I have to deal with one of Mom's old 2002 Motorola Ghetto-phone until Christmas. But hopefully (fingers crossed) I'll get the new Vu!

Cell phones are haunting me! I have mixed feelings about the iPhone...I'll take the Blackberry!

iPhones are cool, as is pretty much everything Apple puts out. You need to switch to a Mac. Seriously, what's with the PC business?

I've been hooked on the blackberry for years. But I hate changes. Frankly I sometimes long for the day of the rotary dial. But then again, I'm old.

RightinFlorida,
I am in my late 40's, and I remember dial telephones, but I can one up you on this.
I am originally from a town called Grand River, Iowa. I still have family there.
Grand River is a town of about 200 people. When I was growing up, we didn't have dial telephones, we had the old crank system.
For those who don't know how the crank system works. You turned a crank on the phone, it would cause a little lever to drop (also there would be a buzz) on a switch board. The operator of the switch board would plug into the line the call was coming from, ask who you wanted to call; then, the operator would connect you to the line you wanted and rang it for you.
Plus, most people were on a party line, we had 12 people on ours, and you would know who was being called by a series of long or short rings. Ours was three short rings.
You could call someone on your party line by doing the ringing yourself. But the operator would still come on and say, "Grand River," and you would tell her you were making a party line call and continue ringing away. (NO JOKE!)

To make a call off the dial system or from a dial system was a real pain. To call from a dial system you had to give an operator a series of numbers. I remember when I went off to basic training, I tried to call home, and the operator thought I was nuts, laughed and hung up on me. I was upset, told my drill sergeant what the problem was, he too laughed, but said, "I've got to see this s***." and he accompanied me to the phone bank and gave me time to talk to home, when he found out I wasn't joking. Thank You SSG Miller.

Grand River was the second to the last town in the United States to leave the crank system. The town that held out to the last was a place called Byrant Pond, Maine.

I was stationed in Germany when the end came for Grand River's old telephone system. I was at work and the Armed Forces Network had Paul Harvey's News and Comment on, and Paul Harvey talked about it.

One guy I was working with started laughing. I told him that Grand River was my hometown. He replied something about a bull's restroom habits, so I pulled out my driver's license and showed him.

Even though the system was a real pain in the butt, it had its advantages, too. It was personal and helped a small community to look out for others. Once again as a serviceman away from home, I was in Biloxi, Mississippi when a small hurricane hit. I called home to tell Mom and Dad I was fine. I gave the operator the special numbers and was able to reach the Grand River operator, Helen, who was one of my old Sunday School teachers.
Mom and Dad wasn't home, but Helen knew where I was and asked how I was doing. I told her I was fine. She told me she would call my parents later and tell them I was fine. I got my message through, and it didn't cost me anything.

Wow, Steve, you beat me for "remember when" stories of telephones. I'm in my late 50s and only saw those systems on the Andy Griffith show. The best I can do is tell the youngsters who work for me about the days we only had to dial 5 numbers because everyone was in the same WYman (99) exange, so we had to dial 6 + the next four numbers. And I get the same looks that dinosaurs would get should they come back to life.

Pat-I love technology, the newer the better, but I hate changes that cause me to re-learn what I thought I knew.

I remember the five digit days. We had some friends who lived in Leon, which was the county seat for Decatur County, Iowa, and I remember their number to this day, HIckman (HI) 6-6489.