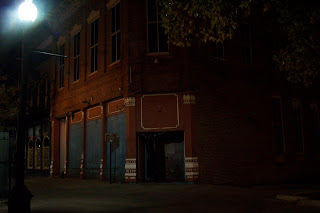 Friday Night. Steve and I went to one of our favorite spots for dinner - The Blind Tiger. We were both sort of craving a good old hamburger and nobody does them better than The Blind Tiger. I've blogged here before about their crab cakes, which I love. Besides, we totally love their REAL, not frozen, home made onion rings and FRESH, not frozen, fried mushrooms. Talk about heaven on a plate - those mushrooms are to die for. They come out HOT with a ranch dip and a horseradish based dip and the mushrooms are sprinkled heavily with grated Parmesan cheese.

I've eaten lots of meals in that building going back to when it was T.G.I. Fridays back in the 1970s and 80s. After Fridays closed it became Chelsea Square and then has been The Blind Tiger ever since. Through them all, the building has kept its character. The hardwood floor is polished with nothing but the years of foot traffic and the tin ceiling still gleams. Window

s make up the exterior walls giving full view of all downtown traffic, both foot traffic and vehicles coming off the Texas Street Bridge. It's just a really comfortable place to go hang out, eat a great meal and relax. We somehow almost always get the same server when we go, and we like that, too.

When we left we strolled through "the Square" and I had some major flashbacks of the glory days of the Square. For those not familiar with the area, Shreve Square is the two or three block area coming off the Riverfront into downtown. Once a thriving commercial area, in the 1970s and 80s (when I remember it) it was a busy, hopping collection of clubs and restaurants. In 1978 I was working as a waitress at Whiskey River - my mother still has nightmares about this - and then worked as a waitress at The Spaghetti Store. After work at the restaurant, or on my nights off, we'd all go to "The Sportspage" or to "Humpfrees."

Well anyway, skipping the stroll down good-times-lane, it was just sad tonight to see how it's all died. The Square became The Red River District and after some shootings and muggings and fights, nobody goes there anymore. The old buildings have been left to decay and be either destroyed or consumed by casinos and turned into parking lots. So sad. I stood there, right there, in front of Humpfrees and could just hear "A-Train" playing, see the cold beer in the ice in the aluminum water troughs, I could see the crowds mingling in and out, standing outside talking and laughing... And then it was gone. Dead. The three huge windows that made up the back of the stage are now covered in plywood. The entrance is boarded up and dark.

Things change and time marches on. We all get older! Back then you could have NEVER told me I'd be home blogging on a Friday night, watching The Wizard of Oz. Not me baby, I'm going to be OUT! Clubbing! Forever!

On his blog, Robert Trudeau is now putting out the word for old Humpfrees stories; he has a student that is working on an historical paper of the area. I'll be interested in reading about it when she finishes her project! There were lots of famous folks that went through that place and lots, lots of wild stories. She's more interested in the historical aspect, not the "oh I got drunk there!" stories, which is probably a good thing! If you know anything that might help her with her project, send it along!

As long as The Blind Tiger stays open and doesn't fold under the heavy burden of chain restaurants and casinos I'll be happy. But god help me if they should fold and I have to muddle my way through a quagmire of frozen breaded mushrooms and frozen minced onion - onion rings. Blech. Blind Tiger will always remind me of the glory days of the Square. Good times.
Posted by Pat Austin Becker at 8:06 PM

u had me until the mushrooms! ew...

i remember you working there

and i remember you living off some candy called Bloopers (??) and Dr. Pepper

anyway - i definitely remember you working at "The Spaghetti Store" :)

I've had some good times at the Blind Tiger myself. Love that place. Here's hoping it will remain for a long time.

Wow...got a little misty there. I lived in Shreveport from 1972 through 1981. I went to College at Centenary, started KSCL (the college station) and wend on to start Q-93fm (KMBQ). I spent a lot of time in the Square...especially Humphree's. I also played guitar and sang during Happy Hour at The Spaghetti Store and at Seven Sisters. I also started my magic career in Shreveport. My first paying gig was doing close up at Friday's and then at Chelsea's. Later I would get to perform magic at The Revel. I always stop at the Blind Tiger when I come back to town and I also walk around the square and wonder what happened. I've had a wonderful life making people laugh and say WOW...It all started in Shreveport.

I remember seeing Jim Dandy from BOA playing at Humphree's in 1982. Good times. Wasn't there a bar Steamboat Annies up a block and on other side of Texas St? Remember hearing KMBQ blasting there too!