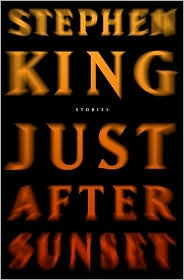 My new Stephen King book has arrived in the mail and I can't wait to get to it! This one is a collection of short stories, a couple of which I've read already in either Tin House or The New Yorker. I might have to remove the dust jacket though because it hurts my eyes!

I've been reading Stephen King for at least 28 years (crikey - has it been that long!?); I loved The Stand and The Shining. King has a way with words that I find amazing. He is no Hemingway or Fitzgerald, but he never pretends to be. It's just not that kind of writing, and he is the first to point that out. King sort of lost me, though, when we got to Cujo and Christine. That car thing just about irritated me.

I picked him up a couple of years ago when I taught a Creative Writing class; he had published a book called On Writing, about the writing process of course, and I was curious as to what he had to say. He had done another non-fiction book years before called Danse Macabre about the horror genre. That one I didn't like so much. I still have it though, and might take another look at it. On Writing was wonderful though and I used a lot of what he had to say with my class.

I've started picking up his works again and some are good and some not so much. I never bothered with Cell, for example, but totally loved Bag of Bones and Lisey's Story. I thought Lisey's Story was great for its descriptive detail and the fact that the protagonist was a woman. I would think it would be difficult for a man to write from the perspective of a woman.

I keep trying to read to Stephen King but I can't get into it. I grew up with my parents reading him, I've seen severl of the movies, and I have friend who swear by him, but all I've ever read is "Carrie." I'd started reading "The Girl Who Loved Tom Gordon" but I got so busy with my last job that I never finished it. My mom told me that was not a good one to start with though...

I really like finding women who like at least some of Stephen King. I've been a fan from the beginning. Steinbeck he isn't, but then how often does one come along? King is of my generation and he writes so well about boys growing up. Sometimes it felt life some of my life. And while I didn't really care for Cujo (should have been a short story) I did like Christine (maybe it's a guy thing). My problem with much of King's work is he seems to write until he gets tired, then wraps it up too quickly, and it can get messy. But even knowing that, I read on. I liked Cell overall and it's an interesting premise and he gets lots of milage from it. But, maybe over half the way in, I just knew I was going to have problems with the ending. But I'm not sorry I read it.

like you - mike has EVERY LAST ONE - and even the books on writing, etc. when he was sick once i went to a half price and bought him all the ones he didn't already have

i've only read a few - the Shining (in the bedroom you sleep in - when Mimi lived there - it scared the HELL out of me); Dead Zone. and Mike always chides me for not getting through the big books of life "Atlas Shrugged", "Moby Dick", "War and Peace" (all three I read 3/4 and gave up - god, the shame) and lastly - to stay on point - the Stand. Mike swears it's King's best and his favorite. ANYWAY - he just got Dumas Key or something like that - and yours is different - so I'll have to go see why he doesn't have this one yet!