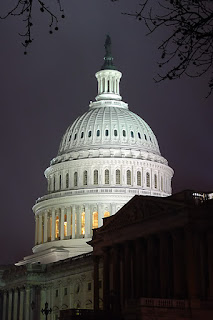 Update: (5pm) An article by George Lardner, Jr. on the same topic in the New York Times.

I have to admit that I have been less than impressed with the unfolding Obama cabinet announcements this week. With all the "HopenChange" mantra surrounding his ascension to office, I've been surprised to see a lot of Clinton retreads in his picks. I'm willing to go with that ... I thought, well, maybe these are okay people who just had the misfourtune to be tied up with Clinton and, as Obama supporters often reminded me, association with shady people doesn't necessarily make you shady. Maybe those Clinton people were actually okay. I'm willing to give the benefit of the doubt up to a point.

The one that bothers me is the Eric Holder appointment. Gosh, even Ronald Reagan picked Holder in 1988 to serve as a superior court judge! What could be wrong here?! But I'm troubled by Holder's actions since then. I'm troubled by his involvement with the Marc Rich pardon of course, which is what most people are talking about. Holder engineered the end-run around the justice department that allowed the eleventh-hour Clinton pardon to go through. Rich, if you remember, was in exile at the time, and that would have posed a problem to the justice department. He was indicted in 1983 for tax evasion ($48 million!), 51 counts of tax fraud, and more troubling, illegal trading with Iran during the hostage crisis. Denise Rich made huge donations to the Clinton library and to the Democratic party, thus fueling talk that Rich's pardon was bought. Tsk, tsk.

Also, on the same day as the Rich pardons, guess who else got the free ride? Susan Rosenberg and Linda Evans of, you guessed it, the Weather Underground. They were associates of Bill Ayers, of course, and were serving sentences for bombing U.S. government facilities. With Holder's guidance, these pardons came just weeks after the bombing of the USS Cole.

Also under Holder's tenure was his management of the Elian Gonzales fiasco in 2000. I remember that clearly and the whole thing troubled me at the time.

And yes, it's true that Holder believes in regulating free speech on the internet. Here's Holder on free speech in 1999: "Well, it's very difficult, given the tenor of the recent Supreme Court cases. The court has really struck down every government effort to try to regulate it. We tried with regard to pornography. It is going to be a difficult thing, but it seems to me that if we can come up with reasonable restrictions, reasonable regulations in how people interact on the Internet, that is something that the Supreme Court and the courts ought to favorably look at."

He's no fan of the second amendment, either.

No, the Holder move that bothers me most is his role as the point-man in charge of the defense of Clinton's pardon of the Puerto Rican FALN terrorists who conducted a violent campaign from 1974 to 1983, primarily in New York and Chicago iin which at least 6 people died and 70 were injured. The FALN terrorists never expressed remorse and in fact threatened the judge's life who presided over their case. Terrorist Carmen Valentine told the judge, " You are lucky that we cannot take you right now." Another terrorist, Dylcia Pagan warned the courtroom, "All of you, I would advise you to watch your backs!" And finally, terrorist Ida Rodrigues told the judge, "You say we have no remorse. You're right...your jails and your long sentences will not frighten us." Why would anyone pardon, or work for the pardon, of these people? Holder testified that his department did not even question these people to find out if they were remorseful or if they would cooperate with the government in any way to locate one of their accomplices who was still on the Ten Most Wanted list. These pardons were granted over the objections of the FBI and the Bureau of Prisons, yet Holder supported this move for clemency.

These pardons were issued in the months after al-Qaeda's 1988 U. E. embassy bombings. Clinton's supposed motivation for the pardons was to assist his wife's senatorial campaign by garnering support (votes) in favorable communities.

The Clinton tenure has a reputation as being soft on terrorism and the FALN pardons is evidence of this. There is no way that these people deserved to be pardoned. These people hurt and killed Americans, they are a known terrorist group, and Clinton and Holder worked to set them free? Was Holder just following orders from Clinton? Did Holder actually believe they deserved clemency? And is this a position Obama agrees with? It is something he surely must have looked at as he considered Holder. I'd like to know Obama's position on the issue of clemency for terrorists, or at least, these terrorists in this case.

So I'm not convinced this is actually a good pick by Mr. Obama. There is no doubt that the confirmation of Holder would go through - the democratic Senate votes are likely there. But this is one pick that Mr. Obama might be obliged to defend. Holder has a lot of baggage.

an article you might find interesting, by David Brooks, former senior editor of The Weekly Standard:

This truly will be an administration that looks like America, or at least that slice of America that got double 800s on their SATs. Even more than past administrations, this will be a valedictocracy — rule by those who graduate first in their high school classes. If a foreign enemy attacks the United States during the Harvard-Yale game any time over the next four years, we're screwed.

Already the culture of the Obama administration is coming into focus. Its members are twice as smart as the poor reporters who have to cover them, three times if you include the columnists. They typically served in the Clinton administration and then, like Cincinnatus, retreated to the comforts of private life — that is, if Cincinnatus had worked at Goldman Sachs, Williams & Connolly or the Brookings Institution. So many of them send their kids to Georgetown Day School, the posh leftish private school in D.C., that they'll be able to hold White House staff meetings in the carpool line.

And yet as much as I want to resent these overeducated Achievatrons (not to mention the incursion of a French-style government dominated by highly trained Enarchs), I find myself tremendously impressed by the Obama transition.

The fact that they can already leak one big appointee per day is testimony to an awful lot of expert staff work. Unlike past Democratic administrations, they are not just handing out jobs to the hacks approved by the favored interest groups. They're thinking holistically — there's a nice balance of policy wonks, governors and legislators. They're also thinking strategically. As Norman Ornstein of the American Enterprise Institute notes, it was smart to name Tom Daschle both the head of Health and Human Services and the health czar. Splitting those duties up, as Bill Clinton did, leads to all sorts of conflicts.

Obama seems to have dispensed with the romantic and failed notion that you need inexperienced "fresh faces" to change things. After all, it was L.B.J. who passed the Civil Rights Act. Moreover, because he is so young, Obama is not bringing along an insular coterie of lifelong aides who depend upon him for their well-being.

As a result, the team he has announced so far is more impressive than any other in recent memory. One may not agree with them on everything or even most things, but a few things are indisputably true.

First, these are open-minded individuals who are persuadable by evidence. Orszag, who will probably be budget director, is trusted by Republicans and Democrats for his honest presentation of the facts.

Second, they are admired professionals. Conservative legal experts have a high regard for the probable attorney general, Eric Holder, despite the business over the Marc Rich pardon.

Third, they are not excessively partisan. Obama signaled that he means to live up to his postpartisan rhetoric by letting Joe Lieberman keep his committee chairmanship.

Fourth, they are not ideological. The economic advisers, Furman and Goolsbee, are moderate and thoughtful Democrats. Hillary Clinton at State is problematic, mostly because nobody has a role for her husband. But, as she has demonstrated in the Senate, her foreign-policy views are hardheaded and pragmatic. (It would be great to see her set of interests complemented by Samantha Power's set of interests at the U.N.)

Finally, there are many people on this team with practical creativity. Any think tanker can come up with broad doctrines, but it is rare to find people who can give the president a list of concrete steps he can do day by day to advance American interests. Dennis Ross, who advised Obama during the campaign, is the best I've ever seen at this, but Rahm Emanuel also has this capacity, as does Craig and legislative liaison Phil Schiliro.

Believe me, I'm trying not to join in the vast, heaving O-phoria now sweeping the coastal haute bourgeoisie. But the personnel decisions have been superb. The events of the past two weeks should be reassuring to anybody who feared that Obama would veer to the left or would suffer self-inflicted wounds because of his inexperience. He's off to a start that nearly justifies the hype.

I can't even read this stuff right now - it makes me literally feel sick to my stomach because there's absolutely nothing I can do about it.

If you know anyone in GA, see to it that they are voting for Saxby before or on December 2nd!