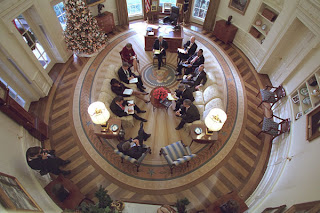 This is an interesting article in Slate about how each incoming administration gets to redecorate The White House, including explanation of how much leeway they have in which rooms.

Every four years, Congress appropriates money to maintain and redecorate the 132-room executive mansion. (George W. and Laura Bush were allocated $100,000 for the president's second term.) For the living quarters, which are located on the top two floors, the first family has significant leeway. It usually falls to the president's wife to supervise paint jobs and to acquire new furniture, wall hangings, and bedding. If, however, the president's family wants to alter the appearance of historic guest suites (like the Lincoln Bedroom) or any of the public spaces on the ground and first floors (like the Green Room and the state dining room), they must consult the Committee for the Preservation of the White House. (The curator of the White House, the director of the National Gallery of Art, and other luminaries belong to this committee, which Lyndon Johnson established by executive order in 1964.) State rooms are generally refurbished once a decade, often with funds from the White House Historical Association.

And as to large-scale additions: