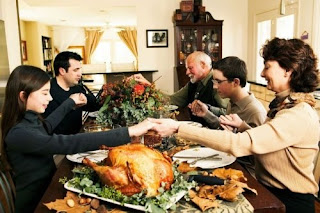 Ira Stoll has written a nice article in the Wall Street Journal about Thanksgiving (maybe those nut-cases in California should read it). Stoll is the author of the new Samuel Adams book (I've ordered it!) which is receiving great reviews.

When was the first Thanksgiving? Most of us think of the Pilgrims at Plymouth in 1621. But if the question is about the first national Thanksgiving holiday, the answer is that the tradition began at a lesser-known moment in 1777 in York, Pa.

After the Revolution, Adams, who was eventually elected governor of Massachusetts, maintained the practice of declaring these holidays. In October of 1795, the 73-year-old governor proclaimed Thursday, Nov. 19, as "a day of Public Thanksgiving to God," recommending that prayer be offered that God "would graciously be pleased to put an end to all Tyranny and Usurpation, that the People who are under the Yoke of Oppression, may be made free; and that the Nations who are contending for freedom may still be secured by His Almighty Aid." It turned out, though, that the ideas of thanking God for America's blessings -- and of praying for the spread of freedom everywhere -- would long outlast Adams's career.

The concepts still meet with skepticism from time to time. But they are reason enough to pause during tomorrow's football game or family feast and raise a glass to the Founding Father who began our Thanksgiving tradition.
Posted by Pat Austin Becker at 8:48 AM