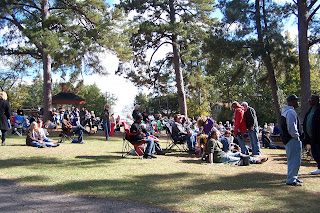 The refrigerator guy came today, finally; I've had the new fridge for two weeks today and it has yet to chill below 45. The repair guy left here six hours ago and I'm still not chilled below 50. I'm not optimistic.

When the guy finally left, I decided to go to the Highland Jazz and Blues Festival. It's five minutes from my house, was a beautiful day, and I was in the mood to blow off all the work I really should be doing. I LOVE outdoor festivals and musical events so this was the deal for me. It would have been lots more fun if Steve had been here, but he went to La. Tech to see his son play in the band; I would have done that but for the refrigerator guy.

Anyway, I got to the park around 1 and there was already a big crowd building. It was a beautiful clear day but definitely on the chilly side. Highland Park is in the historic Highland neighborhood and is really a beautiful, huge park; lots of huge sloping hills covered in slippery pine straw! They had two stages set up - the Pavilion Stage and the Gazebo Stage on opposite ends of the park. One end had the food booths and the other end had the artsy booths. In between were the beer booths.

I got there in time to catch the Bluebirds and Miki Honeycutt (I'm REALLY reliving my old bar/music days this weekend) and that was fun. Miki can still belt out those long notes! The thing I love about the Highland neighborhood and this event is that you don't feel like a total doofus if you go alone because you WILL run into people you know. And if you don't, you'll run into people that will talk to you anyway. This was a dog and kid friendly event and so you could always talk to people about their dogs! Anyway, as I was settling into the Bluebirds, there was my old buddy Rocque making his way through the folks, looking for a place to park. Rocque has a spinal cord injury which is making his left leg shrivel up and useless (sort of like "House") and he walks with the aid of a cane. I always run into him at musical events - several years ago when the Revel was here, Little Feat was playing. Nobody would go with me to see them because it

was cold and raining. So I went alone; of course I ran into Rocque. He's seen more bands play live than anyone I know. He's planning on going to see Eric Clapton in Royal Albert Hall in May. Good grief. Anyway, we sat and listened to the Bluebirds until his children ran up from the playground ready to go.

I spent the rest of the afternoon mingling with folks and petting dogs. There was a really great band called "Total Choice" playing in the Gazebo. After they finished I went to the other end and listened to Bill Causey and his band play my favorite Big Band classics - love that!

Then Buddy Flett played an acoustic set - this is amazing as he is working hard on recovery from an illness that left him totally unable to play. He has had to relearn all his guitar skills. Listening

to Buddy today, you can't even tell.

All in all, the Highland Jazz and Blues Festival is another great Highland neighborhood event. Steve and I love the Highland Mardi Gras parade. The festival is sure to continue growing and to become a fixed date on my calendar!
Posted by Pat Austin Becker at 5:15 PM

i love that checkers is such a good friend to you and took you to the festival :)

That actually is not Checkers but a twin dog. A distant cousin.

I thought that dog was Checkers, too! Oops! That festival sounds pretty good.