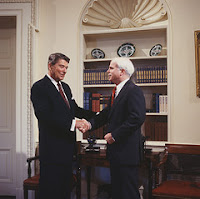 Quote of the Day:
"Jimmy Carter and Bill Clinton were both elected president at relatively young ages, and both made grave mistakes that directly led to the deep foreign policy problems we have today. The next president will face serious issues, from al-Qaida to Iran to Russia to the economy, which will require a maturity achievable only through age and experience."

Inventor's Business Daily has an interesting article today which looks back at a 2005 survey of scholars by the Wall Street Journal and The Federalist Society. The survey participants included scholars in history, politics and law.

The most overrated president, according to the survey was Kennedy. The focus of the IBD article is that younger presidents have not fared so well.

"One month after President Clinton took office in 1993, the worst terrorist attack in U.S. history up to that date occurred with the bombing of New York's World Trade Center twin towers. During Clinton's eight years in office, Osama bin Laden and al-Qaida bombed U.S. embassies in Tanzania and Kenya, killing 250 and injuring 6,000; bombed U.S.-Saudi facilities in 1995 and 1996, killing Americans; and in 2000 bombed the USS Cole.
Through all this, according to the 9/11 Commission Report, the Clinton administration had 10 different chances to get bin Laden. Intelligence knew just where he was, but was never able to make the final decisions or take effective action."

The article also discusses Carter's blunders as well as the Kennedy handling of the Cuban Bay of Pigs episode.

No president is always going to be perfect by any means. With the challenges ahead of us right now, we owe it to ourselves and our country to put the most experienced man in office.
Posted by Pat Austin Becker at 8:11 AM

I agree, Pat, that experience counts. Along with a strong core of service toward others. My first vote was in 1972 (just turned 21 and eligible). Was in college and didn't much like how the Vietnam War was being accomplished. Yet I voted for Nixon and never regretted it. I did not vote for Carter or Clinton, and never regretted that either.

Even one so old that my sheer statistics he might not make it and you get Palin (ooooh - wait- NOT experienced) in office?

You betcha! Actually, she's got more experience than Obama! :)

When I say experience counts-that means at the top of the ticket. Obama not experienced for the job he's shooting for. Palin is experienced for the job she's shooting for. Besides, I think statistics will show that McCain comes from long-lived family stock and is likely to serve at least the first full term. Within a few years (maybe one) Palin will be more ready. Plus she brings a lot to the table in other areas that McCain needs shoring up. And..,Look at Obama's family history-not quite so good. And he's (horrors!) a smoker.