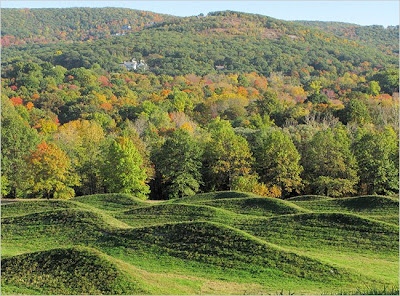 The New York Times today has an article about Maya Lin's new work at Storm King Art Center in New York. It is an 11-acre installation and opens next spring. The work is also third in a series of waves that she has done, the first in Michigan and the second in Miami.

I'm not artistic at all; I have no imagination or skill, but I've always been intrigued by Lin's work. She makes it look so easy. Her story has always been an inspiration to me also. I always talk about her in my classroom to motivate students that dreams really can come true if you work for them. We talk about the Vietnam war whenever we read Tim O'Brien, for example, and we talk about the memorial that Lin designed. I tell my students about the open contest that Lin entered when she was a senior at Yale School of Architecture and how her submission was selected out of 1400 entries, some from professional designers. The choice of Lin's design was controversial at the time as many people wanted a more "traditional" design.

I've seen the traveling replica of Lin's Washington memorial (but never the real one) and even the small scale version has an impact. "The New Yorker" wrote a profile of Lin several years back in which she talked about her inspiration for the project and I think that's when I really started watching her. She talked about the wall as a "rift in the earth" and as "a giant tombstone." She

explained how the polished black granite is set into the side of a hill so that when you actually look at the wall, at the names of the dead, you see also your reflection inviting you to look inside yourself. When you stand on top of the hill, over the wall, you are also standing over the buried dead, as if at a cemetery. She did not want the wall to make a political statement of any kind. But the symbolism of the whole project was brilliant.

Her new wave field installation covers 11 acres and visitors will be able to walk into the piece over swells ranging from 12 to 18 feet. Lin explained that she wanted you to feel like you could "get lost" in the waves. The waves will be covered with long grasses that bend and sway as the wind blows, adding the notion of movement to the waves.

You can see the evolution of the pro 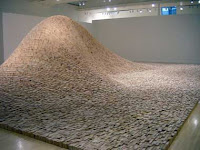 ject in various exhibition pieces that Lin has done - at left is a wave created out of two-by-fours cut to various lengths; it is sturdy enough that you could climb on it (but I wouldn't!)

The Times article also has a short video interview with Lin in which she takes you inside her studio; if you're artistic at all you will enjoy watching it. She has made sculptures from bottle caps and from plastic toys, explaining that "it's almost embarrassing how much junk we accumulate."

I think what I like most about Lin's work, besides her creativity, is how it is so organic and connected with the earth and nature. She is much more of an environmentalist than I am, but even her explanation about The Wall shows a connection with nature that I like.

anyway, initially (b/f I'd seen the real one) I thought it was not traditional enough either

but when you see it in person, the idea of its simpliticy - this insane volume/number of names, against this black nothing ness -that seems to not end -suddenly it becomes clear just how perfect and on point it is about a lot of folks feelings regarding that war

and I find it bizarre beyond words you don't see yourself as creative or imaginative?? I disagree. :)