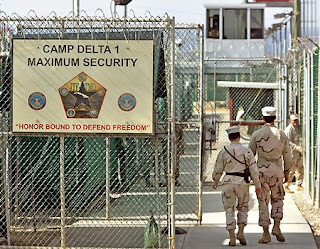 The Weekly Standard has an excellent article by Thomas Joscelyn this morning on the terrorist detention facility at Guantanamo Bay. It's a highly researched and detailed article but in short, Joscelyn explains the important function Gitmo has performed in the war on terror.

Mr. Obama has often stated his intention to close the facility but he has not been clear, as of yet, as to what will become of the 242 detainees currently held there. He has suggested that he wants to try some of them in civilian courts, but Joscelyn correctly asserts that to do this will be to put highly classified and sensitive information at risk. It would also, of course, give the detainees a forum in which they might "grandstand" and further their own agenda.

One of the points of Joscelyn's piece is to caution the Obama team to find an acceptable forum in which to handle these people. These are not conventional prisoners of war and are not entitled to Geneva rights (Obama's AG pick, Eric Holder, even agrees with this.)

Joscelyn makes the point that President Bush established Guantanamo as a detention facility after the 9/11 attacks "in the context of a war against enemies who are still seeking to attack our homeland. President Bush, whatever his faults, protected America after September 11, 2001" and that soon "it will fall to President Obama to do the same." Joscelyn outlines many such thwarted attacks.

Letting these detainees go will not accomplish security for Americans. Nor will sending them "home." Some of their countries are not allied in the war on terror; Yemin for one. Approximately 100 detainees are from Yemin, and history shows that those returned to places like that inevitably find their way back to the battlefield.

Obama has previously stated that closing Gitmo will regain "America's moral stature in the world," but that won't matter much if we're blown to bits. He has also said that he wanted to return to the way we did things in the 1990s when terrorists were put on trial after the fact. He said, "And, you know, let's take the example of Guantanamo. What we know is that, in previous terrorist attacks - for example - the first attack against the World Trade Center - we were able to arrest those responsible, put them on trial. They are currently in U.S. prisons, incapacitated."

This isn't exactly true, as Joscelyn explains, and trying those folks did little to stop the terrorist network that grew between 1993 and 2001.

I suspect Obama will figure this out as he settles into office and it will be interesting to see what he concludes.
Posted by Pat Austin Becker at 8:23 AM

"Club Gitmo, the tropical retreat from the stresses of Jihad!" Rush Limbaugh.

So, America's "Cowboy" policy on handling enemy combatants is detaining them on American property in a foreign country. HORRORS!

What could possilby the the chief complaint from an American or Allied soldier about the Jihadists' policy on handling them when they were captured. If there ever had been one who lived, I imagine they would have told you they would rather have been detained.

Well-written article. I think the writer does a good job of summarizing in the end:

"The faults of the Bush administration go beyond its strange failure to make its case to the public. Its refusal to release a complete list of the remaining detainees is an example of secrecy taken too far. Its use of techniques of dubious legality and morality to extract information is rightly questioned. And the military commissions approved by President Bush have proceeded at a snail's pace-only two detainees have been tried.

It is possible that the Obama administration will create a special national security court to handle some of the cases. This is not a bad idea.

When the Bush administration sent the first detainees to the U.S. Naval Station Guantánamo Bay in 2002, it was improvising-understandable in a situation without precedent. The captured jihadists and terrorist agents were not conventional prisoners of war, and they were not ordinary criminals. In the ensuing seven years, the administration failed to replace its stopgap measure with an institutional response seen as legitimate. Bush's successors should remember, however, that he took the steps he did in the context of a war against enemies who are still seeking to attack our homeland. President Bush, whatever his faults, protected America after September 11, 2001. Shortly, it will fall to President Obama to do the same."

The administration's creation of Gitmo was completely justified, considering the circumstances under which it was created. Dangerous people were placed there in a time of "war", but at some point, you've got to establish some kind of system for dealing with them. It was the administration's responsibility to figure out a way to handle these people in a manner which establishes a precedent for how our country deals with this in the future AND upholds our constitutional and morals as a society. Its 7 years after 9/11 and we still haven't gotten beyond our first idea. So, we're left with the Guantanamo Conundrum.

The administration simply never felt obliged to figure out how to apply our constitutional values to this new issue of terrorism and terrorist detainees. That doesn't mean that the detainees are given OUR rights as citizens. It means, the way we deal with others reflects upon us as a society. That's why we do participate in the Geneva Convention, that's why we don't carpet bomb villages with civillians even if we know there are combatants in that village, that's why we ally ourselves with countries we feel to be good and righteous. I think when Obama talks about regaining our moral stature, it refers to just that. We can hardly proclaim goodness and righteousness, and serves as a moral compass for the world, until we find suitable ways for dealing with our enemies while at the same time protecting our people.