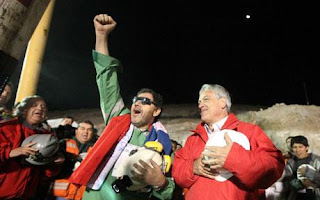 Peggy Noonan's column this week is why I used to love reading her;  she's writing about the Chilean mine rescue and she nails the heart and emotion of the story.

I was enthralled with the story, as were millions around the world who watched.  One by one those guys were pulled from what was very nearly their grave and every man had a story.  I talked with some people at work today who were of the same mind as I was;  the water cooler talk was, "Hey!  Did you watch those miners last night?!"  Everyone did.

Noonan gets this one right:

So many nations and leaders have grown gifted at talk. Or at least they talk a lot. News talk, politics talk, spin talk, selling talk: There are nations, and we at our worst are sometimes among them, whose biggest export seems to be chatter. But Chile this week moved the world not by talking but by doing, not by mouthing sympathy for the miners, but by saving them. The whole country—the engineers and technicians, the president, the government, the rescue workers, other miners, medics—set itself to doing something hard, specific, physical, demanding of commitment, precision and expertise. And they did it. Homer Hickman, the coal miner's son turned astronaut who was the subject of the 1999 film "October Sky," said Wednesday on MSNBC that it was "like a NASA mission." Organized, thought through, "staying on the time line, sequential thinking." "This is pretty marvelous," he said. "This is Chile's moon landing," said an NBC News reporter

Speaking of Homer Hickam, during the course of this story I wondered what his thoughts were.  I wondered why Fox didn't have him doing some commentary.  Apparently, according to Hickam's Facebook page, he wondered the same thing:


I'll be on CNN around noon tomorrow to comment on the Chilean miner rescue. I guess Fox News is still mad at me after the Shep Smith interview on NASA and the President's plan. Shep liked it. I didn't and still don't.

So, Hickam narrated this story from CNN and from MSNBC.  I'm a longtime fan of Homer Hickam and

.  The Coalwood Trilogy is simply classic.

At any rate, be sure to read Noonan's column this week; it's a keeper.  And it's a reminder to me of how sweet her writing can be!

And if you missed it, here is the rescue of number 33 and the celebration: