Even in Baby Steps The Obama Agenda is Dangerous 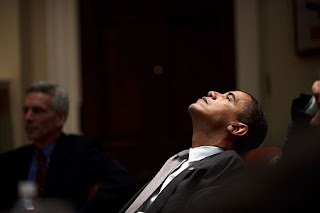 In the face of overwhelming defeat in November, the Democrats and Team Obama are considering "a new, more incremental approach" to their power-grabbing, economy-destroying agenda.  As if they have a choice.

According to this story in today's Wall Street Journal, Team Obama is considering "piecemeal" implementation of immigration reform, energy policy, and closure of Guantanamo, rather than the huge, sweeping, in your face legislation we've become accustomed to.

In fact, it was all Rahm's fault they couldn't get it done so far as he had become "mistrusted by the left" so now Obama has "a better chance to repair relations with the party's liberal base."

Team Obama attempts to hint at an attempt at bipartisanship with regard to immigration reform:

Under the incremental scenario, the White House would embrace Republican proposals to step up immigration law enforcement and border and port security in exchange for measures such as the DREAM Act, which would give illegal immigrant children a path to citizenship through military or public service. White House officials could add an agricultural-workers program to that bill but put off dealing with the bulk of illegal immigrants until later.

But again, when the Dems lose control in November, what choice will they have?

Even piecemeal, the Obama agenda is still a far left liberal agenda, an economic disaster, and thrashing of American principles and values.
Posted by Pat Austin Becker at 6:16 AM

And even piecemeal 'we the people' will fight him at every turn.

Drinking a beer while typing this...