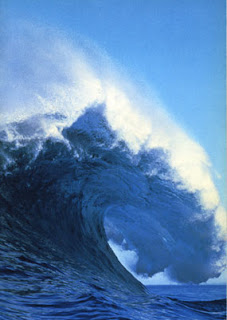 , and it's a real shocker.  I linked to his American Spectator article a couple of weeks ago which gives you a preview of what's in his Broadside.  (These "Broadside" publications are akin to Thomas Paine's Common Sense pamphlets: each is about 40 to 50 pages, small, portable, easy to read.  Ferrara's is No. 17 in the series.)

Ferrera outlines some 13 tax increases coming your way, to include the rise of the top two income tax rates, rise in the capital gains tax, new tax on investment income, increased Medicare HI payroll tax, return of the death tax, tax increase on banks, on oil, gas and coal producers, tax on "Cadillac" health plans, potentially a cap and trade tax and potentially a VAT, just to name a few.

Obamacare brings about a whole new "tsunami" of tax increases all its own.

All of this added to the fact that our corporate tax rate in the United States is rising to about 40% where the European nations we so want to emulate have figured out you've got to reduce that rate to stimulate growth.  The EU slashed their rate from 38% to about the 24% it is today, It's 15% in Germany, 18% in Canada and 12% in Ireland.  If you were a corporation, where would YOU want to do business?

The Democrats, for their part, have no plans to lower the corporate tax rate, by the way.

The Democrats have no plans to repeal Obamacare and it's massive entitlement expansion and multiple tax increases, either.

Most Americans have no idea what's coming at them in January when this wave begins to hit.

The Republicans have a plan.
Posted by Pat Austin Becker at 4:02 PM

Americans are stupid and deserve everything they have coming for being so dumb as to let the mainstream media convince them that the Bush Administration was the problem and that the dumb black Muslim was the answer...in the words of Jackson Browne..."they sell us our leaders the same way they sell us our wars"...

It should have been a dead give away when Obie started saying over and over hat taxes were not going to increase...on camera and on TV every bloody day. Whatever this ultimate liar says is automatically the opposite of the truth.

It's also very clear that this is why he and his minions did not want anyone actually reading the bloody bills they passed.

He came upon us like a thief in the night. Except for those of us who were actually paying attention, and you sorry Americans who voted him in and still support him have no truck with me. Get a rope.