A Shreveport Officer, Sgt. Tim Prunty, pictured below, was shot and killed while on duty last night.  From The Times:

The incident happened at around 3:30 this morning . Sgt. Prunty stood beside his patrol car outside the Circle K in the 3300 block of Bert Kouns Industrial Loop when a man pulled into the parking lot and opened fire, police said.  The suspect, 24 year old Chris Cope, fled the scene. Sgt. Prunty was taken to LSU Medical Center and was later pronounced dead.  Based on witness accounts of Cope's car, police located the car going north on Pines Rd. near W. 70th Street. When officers attempted to stop the vehicle, the driver refused, police said. Officers then pursued Cope until he pulled over on Rasberry Lane near Financial Plaza. He was taken into custody without incident.

Officers searched the car and found a firearm investigators believe was used in the shooting.  Police said Cope was then taken to the Shreveport Police Complex where he confessed to shooting Prunty.  [Cope] will be charged with first degree murder of a police officer. 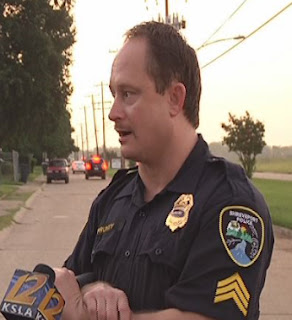 This enrages me that this officer, just standing there in the parking lot, is gunned down in a completely unprovoked manner.  It's never okay, of course, but according to reports, this officer had no run ins or conflict this this suspect.  What kind of scumbag would do something like this?  One of the comments on the KTBS story suggested putting the hanging gallows back in the courthouse square for something like this.  I'd have to agree with him on that one.

You can follow the developing story at The Times, KTBS, KSLA, or over at My Bossier.


Sgt. Prunty's twin brother is also a Shreveport Police Officer.  Prayers, of course, to the family.

I'll follow up here with details of services or memorials for the family as news breaks.

Update:  Here's the video of the news conference by Chief Shaw via KSLA:

Update 10:55:  The Times has the suspect's picture.  I'm not going to publish it, but if you want to look at the scumbag, it's here.

Update 12:30:  Mayor Glover has ordered all municipal flags to be lowered to half staff.  The Officer Down Memorial Page now has an entry for Sgt. Prunty.

Update 5:10:  KTBS reported on their broadcast this evening that the suspect is the son of a retired SPD Captain.  Bless that poor family, too.  Good grief this world amazes me.  The suspect is 24 years old and had three prior misdemeanors.

This is just sad. My condolences to the family and friends of Sgt. Prunty. My fiance is A Cop's Watch, I will let him know about this so he can memorialize the good Sgt.

What a tragedy. To Steve and to all of those who stand between people like this scumbag and the rest of us, thank you.
You are appreciated.

There's a special place in hell for someone who would do that. So sad.

This is terrible news. Senseless...

My sincerest sympathy and prayers to SPD and Sgt. Prunty's friends and family.

Things like this just really leave one speechless. Rest in peace, Sgt. Prunty. You have our eternal thanks.