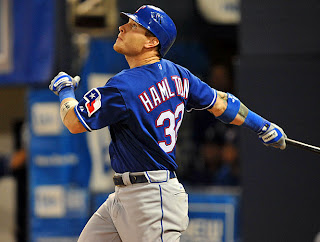 I'm no sportswriter - I'll leave that to Fishersville Mike - but I think Mike Potemra at NRO is off base with his Yankee optimism:

With any other team, beating them at home, two consecutive games, by 8-0 and 10-3, would mean they’re on the ropes. But the Yankees are the Dracula of major-league baseball; it takes that last wooden stake through the heart before you can even think of breathing easily. I turned on the game tonight when the Rangers were up 7-3; the Yankees took, like, three seconds to load the bases and bring the tying run to the plate. It didn’t work out for them in Game 4, but I hope the Texas Rangers know there’s still a long way to go before victory in this series.

To be sure, we're certainly not popping champagne yet down here in Ranger-land, but we are certainly hyped up!  The Rangers lost their first game in this series and blew a commanding lead when they did it.  I'm chalking that up to nerves.  They've been spot on ever since and I would think beating the Yankees twice in Yankee Stadium would certainly give the Rangers the momentum to carry them over the line.  The Yankees certainly aren't out of it and I'd be surprised if it didn't actually go seven games, but I think the Rangers are in it to win it.