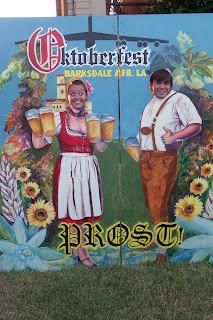 Now that I've survived Oktoberfest and can concentrate on politics again, I need to get caught up with what's been going on in the world.  What better way than to take a spin through the blogosphere and see what's crackin'.

Obi's Sister has some advice for Obama.

Doug Ross refutes the idea that our southern border is secure.

The Lonely Conservative gets hate mail.

American Power has a great post on today's rally in Washington as does Pirate's Cove.

Mind Numbed Robot has a must read post on Progressives in State Governments.

Potluck posts the "most disgraceful enviro ad EVER."

Stacy and Smitty are celebrating birthdays and are trying to recover from blog-flu.

Fishersville Mike's Weekend Watchdog is up.

Reaganite Republican updates the status of the Florida Senate race.

Fenway Nation had a blogiversary!

Bride of Rove laments the death of the NASA dream.

And with that, I think I'm up to speed.  Continued Oktoberfest recovery tonight (compounded by that crazy-assed LSU finale) and back to regular, non-Oktoberfest blogging tomorrow.

Thanks for the link. Here's to a speedy recovery!

Tanks for the linkz...

Thanks, Pat. Glad you made it through.