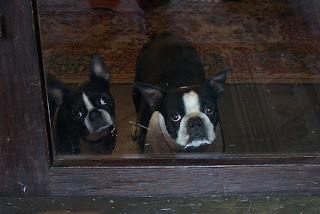 It's Friday morning and the end of a wild work week; not to go into too much detail here, but it's homecoming week and, well, things are a little out of order during homecoming week which always presents new challenges.  It seems students do best with structure and things during homecoming week are, well, shall we say a little less structured, so I think we're all actually looking forward to getting back to normal next week even though it's all been a lot of fun taking part in the various homecoming activities.  I've got to get to school a little early today so I'm in a rush this morning.  I'll share a Happy Friday picture with you of Milly's cute dogs for our Friday sift:

Here are some quick Friday links:

Be sure to catch Peggy Noonan's column; this makes two weeks in a row I've pointed to her work.  The woman that waxed rhapsodic over Obama seems to be coming back to the light, but let's not get our hopes up yet.  She does, however, correctly assess the role of the tea party, I think, when she writes:

There's more; read it all.

Charles Krauthammer is in classic form this morning:

He seldom misses the mark and he is, this morning, discussing Obama's explanation for his falling numbers.

Emilio Karim Dabul has a nice defense of Juan Williams:

Anyone who cares about freedom of speech should protest what has been done to this decent and fair man. And even if that were not the case, even if Mr. Williams' views made him a detestable ogre to most, he still has the right to voice them. For many Americans, NPR's consistent tilt to the left has caused them to reject it as a viable source of news.

That conversation got some lively play in the comments on this blog yesterday.

In a "got to see it to believe it moment," here is Harry Reid claiming to have saved the world.

Finally, would someone go down to The Keys and poke Bride of Rove?  She's too quiet and I'm getting worried about her.

Have a Happy Friday; the weather is gorgeous here and I'm going to enjoy some of that this afternoon, then Steve and I are off for Prime Rib at the Barksdale Club tonight ... and then over to Hangar 2 to visit our mugs.
Posted by Pat Austin Becker at 6:30 AM

Your homecoming week sounds a bit like Derby Week here in Louisville. Everything still works but it's all different!

Now with Mr. Williams totally invested in the "dark side" I wonder who the panel discussions on FOX will choose for their token liberal.

Nice roundup. And I agree the Bride of Rove has been too quiet.

Walter Williams should have been the 1st Black President.