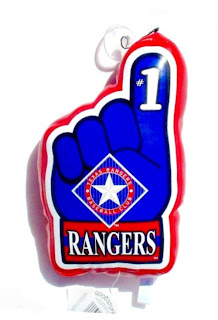 Headed out to The Glen today to pick up mom and take her home for a few hours.  My plan for this weekend was to get some much needed rest and slow down for a few days, but it's not really working out like that!  We have tomorrow off for "Fall Break" so maybe tomorrow I'll just stay in my pajamas all day and read books!  Yeah, that's going to happen.

The Rangers won yesterday and so did LSU, even though the LSU game was blacked out here.  The Rangers play next on Monday.  What else is happening in the world; I stay perpetually behind:

Fishersville Mike started my day with a giggle.

The Pirate's Cove highlights Obama's continued derision of the American voter.  Pundette also has some thoughts on the matter.

DaTechGuy has pictures and video from the rally yesterday in Newton.  He's preparing for another Road Trip with The Other McCain.

Reaganite Republican highlights five statists who need to go away.

No Sheeples Here highlights one of Sarah Palin's money quotes from the California rally yesterday.  American Power has a full report.

Left Coast Rebel shares some thoughts from an Independent Conservative.

Another Black Conservative has video and commentary of the O'Donnell/Coons debate.

Mind Numbed Robot has an important post on The Progressive States Network.

Wyblog highlights some fallout from the mortgage meltdown.

Bride of Rove has been quiet...what's she up to?

I've got to get moving; it's almost 9 and by the time I get out to get mom it will be after ten which means my day is going to run long.  You all behave yourselves.
Posted by Pat Austin Becker at 9:07 AM

Thanks Pat! Have a great day!

Just stumbled over here and -- THANKS! -- I had been so busy for so long that I forgot about the tradition of the FMJRA.

I'll stop back by this site (great stiff!) and see what's shaking!

Hang tough there in Shreveport!

...and check out iowahawk...good laughs

actually the LSU game WAS NOT blacked out here because I watched it on FoxSouthwest...your brother