More Speculation on an Obama/Clinton Ticket 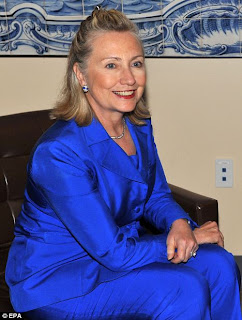 Fueling longtime speculation about Hillary Clinton's future in the Obama administration, Bob Woodward is hinting now that a job switch is "on the table" between Hillary and VP Joe Biden.

Dig this line from Larry King via Politico:

A lot of people think if the president's a little weak going into 2012, he'll have to do a switch there and run with Hillary Clinton as his running mate,” King said, repeating gossip that’s swirled for several months and appeared from time to time on blogs.

IF?  IF the president's a little weak...???  I'd say he is.
This one has been tossed about ever since the campaign when she wasn't the selection in the first place;  I'm not sure she actually wanted it then, though.  I'm don't think she had ruled out a second run for President at that time.  I'm not sure she wants it now or has ruled out a presidential run in 2016 (or 2012 for that matter), but I've long thought she has been unhappy in the Secretary of State spot.  She has often contradicted Obama policy and has seemed overshadowed by the aura of Obama - at least initially.
In fact, I often wondered why she even took the spot and wondered if she had been offered something else in the long term - like VP?   I often wondered about Joe Biden as well; I get the whole power-trip thing, but I never felt like his heart was in being VP either.  He's always seen it as a second-fiddle job.
Nothing in Washington is ever as it seems.
At any rate, Woodward has provided more blog fodder for the left and the right.  Woodward is out there to sell his book and I suppose all this fuels that fire, too.
Would an Obama/Clinton ticket bring back all those disenchanted Independents?  Would it re-energize the disillusioned Obama base?  Who knows...
...but, it does make for interesting speculation!

Posted by Pat Austin Becker at 6:30 AM

Pat, I have always believed that Hillary would contradict ObozO, and try to undermine him as President.

I still believe that. I predict (and I'm probably wrong, because I usually am) that Hillary will soon resign...(depending on how poorly the Dims do) probably after the mid-terms, citing "philosophical differences" with the administration.

Then she will pull a Ted Kennedy and run in 2012. She stands a much better shot at pulling it off than did Ted. She still has great loyalty in the party, and many, many are still upset that the Superdelegates were strong-armed in to going with ObozO.

Plus, I just do not see, and never have seen Hillary as one (especially after being forced to for 8 years) play second fiddle to anyone on a national ticket.

Hillary is very competent in whatever job she has in public service; a great First Lady, Senator and now as cabinet Secretary. She would make a great Secretary of Defense or Vice President, as would VP Biden.

The woman looks like an evil Smurf in that outfit.

Blue? Blue, are you kidding me? It may not be a dress but it's blue. Does anyone know what happens to a woman wearing blue when Bill is around?

Charlene: Puh...leeeeeeeze! Wait, I take that back. Given the choice only between Barack & Hillary, I would much rather she be our President.

G.R., I hate to correct you, because you are wise in the ways of the world and all. But, I would bet my bottom dollar that it never happened to Hillary while wearing a blue dress around Bubba.

That was a test, and you passed. Congratulations!

I'm humbled. I mean, to pass a G.R. exam is like winning the big purple elephant on a two dollar ring toss at The Fair.

It is also amusing how what a woman wears is the topic.

"I really was disappointed with that rep tie GW wore on the 5th of March 2002."

I think Charlene didn't get the joke.

Best way to stir up a lib woman on the phone--"What are you wearing?"

Now, remember, Secretary of State can be the most powerful position in the US government, next to Attorney General.

HRC has been quietly cementing relationships with other governments around the world. This is a very smart move. Don't be fooled by the reset button stuff.

She has never stopped running, and would be formidable against anyone, running as the First Woman President, who has a handle on foreign policy.

The world still loves the Clintons.

I think the Democrat Party is a joke, and I don't get it either.

Side note: The word verification for me is "OCHIT"
Isn't that how a Mexican would say "Oh S***?"