Coons and O'Donnell Spar Over the First Amendment 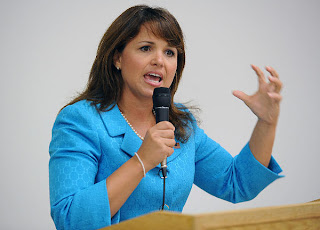 Much is being made on the left this afternoon about what they perceive to be Christine O'Donnell's ignorance of the First Amendment of the Constitution, however, if those folks would actually watch the segment in question and apply just a few reasoning skills, it is quite clear that O'Donnell has a full grasp of the First Amenedment where Coons is the one who misrepresents it.

The conflict centers over the phrase "separation of church and state."  Coons insists that phrase is in the First Amendment.  It is not.

Congress shall make no law respecting an establishment of religion, or prohibiting the free exercise thereof; or abridging the freedom of speech, or of the press; or the right of the people peaceable to assemble, and to petition the Government for a redress of grievances.

I don't see the phrase "separation of church and state" in there either.

O'Donnell clarified her question for Coons, who continued to insist the phrase is there (emphasis mine):

Yet the headline in the Washington Post is "O'Donnell Questions Separation of Church and State."  That's rather misleading, no?

When pressed to name the five freedoms in that Amendment, Coons could not.

O'Donnell was not without error; she had to be reminded what the Fourteenth and Sixteenth Amendments were.  But she had a full grasp of the First Amendment; when you watch the video clip, she presses Coons on the "separation" phrase, has him repeat it several times, and cocks her head in amusement, knowing she's caught him in a misrepresentation.  Yet all the left wingers hear is "You're telling me that separation of church and state is found in the First Amendment?"

As Michelle Malkin points out, that phrase is nowhere in the Constitution but comes from Jefferson's Danbury Baptist letter of 1802.

Criticize O'Donnell if you must, but let's recognize the limitations of Coons, too.   In truth, it's all semantics.  We all know what Coons meant, and we all know what O'Donnell meant.  It's the left wing media's ballyhooing about O'Donnell's "ignorance" that is ridiculous.

But what else is new.

(More at Memeorandum)
Posted by Pat Austin Becker at 4:13 PM

I'd rather watch the replays of Ms. O'Donnell in the '90's on Bill Maher's show, back when she was chasing fame. SMILE

Quoting Michelle Malkin isn't a positive thing, in my opinion.

firm grasp of the first amendment, huh? the same woman who said:

look, you may like her policies, and i'm not arguing her opponent is any brighter, but there's no denying o'donnell is a first class idiot.

I would find it easier to agree that O'Donnell is an idiot if I ever saw an argument or proof besides, "cuz we said so."
Regarding the 'separation of church and state' thing I can only guess that the need to see it in the Constitution must be innate to the liberal mind set. I get the feeling that the overwhelming urge to see it in the founding document is so strong that the reality of the text cannot overcome the power exercised by wish fulfillment. I imagine it is a species of what Coleridge called the willing suspension of disbelief.

the only options we have at this point is to vote out every single incumbent regardless of party affiliation or to exercise the demands that the writers of the legal doctrines of our country put on us with the responsibility to remove an out of control administration by whatever means is necessary.......
could it be time for the second american revolution?

Christine O'Donnell and her Tea Party Republican friends are an embarrassment and a disgrace to the United States of America.. :(

Evidently Heather is a left-wing troll website.
And the comment Heather made comes from a left-wing moonbat that follows the likes of Nancy Pelosi and criticizes us on the right. That's laughable and people like this is about as useful a tit on a boar.