Take Yet Another Trip to Second Hand Rose 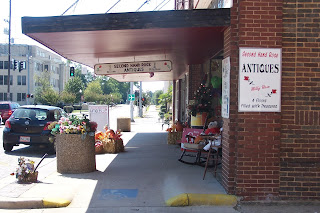 Oh what treasures we saw today at Milly's!  Steve and I made a trip to Minden today to visit Milly at Second Hand Rose and once again, new treasures, new stories, and good times!  You know, we only met Milly in March of this year, but it seems like we've known her forever.  She's such an endearing, fun, loving person that you just can't help but be enchanted by her exuberance.  And what a life she's had:  she's been in the antique business for nearly 30 years.  She ministers in prisons and in nursing homes.  She's the daughter of a decorated Air Force veteran.  She sings like an angel and has sung at The White House for...I think she said the first President Bush.  And she has Boston Terriers, and who doesn't love a Boston Terrier?  I mean, look at her babies:
A 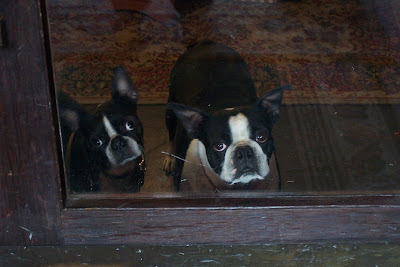 And Oh the treasures we saw today.  Milly had just bought part of the estate of a gentleman who had spent a lot of time in Germany and France.  She had lots of cool handcrafted German tools and other items she was anxious to show us.  In her shop window out front she had a nifty old wooden sled: 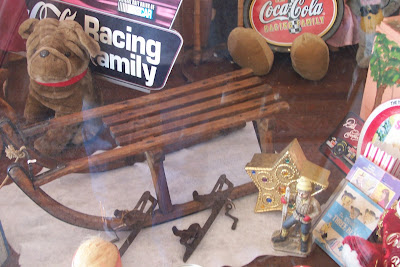 She also had some old shoe skates with the key and some his and her wooden cross country skies in the window.

Once inside, of course Steve bolted to the third floor to get Scuba Pig: 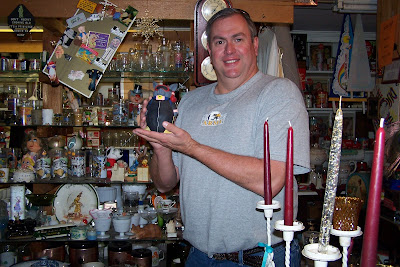 Here's the close up of Scuba Pig.  The Teenager has taken a liking to Scuba Pig and wants it to live in his room.  That's fine with me.  And no, we did not get the Chappaquiddick book.

So back to the German stuff ... the tools were cool; there were several vises of various sizes, an old hammer, some ice tongs, shears, bellows, planes, and even a bear trap: 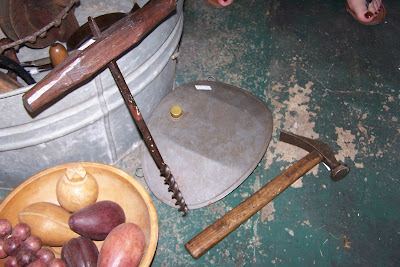 The oval metal thing?  That's an old hot water bottle.  It has two little loops on each side at the top for a string (you can see one near the fruit bowl) and a knob on the top front where you pour in hot water.  Fill 'er up and tie her on and it's a hot water bottle.

This old German barrel had been modified with wheels on the bottom, a wine rack in inside and also had a hole in the front for a spigot in case you wanted to put a keg inside.  It was pretty neat: 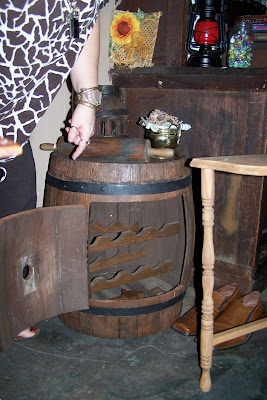 Here's Milly holding an old wheel (which prompted her to burst out in a chorus from "Fiddler on the Roof" because she said it reminded her of the movie: 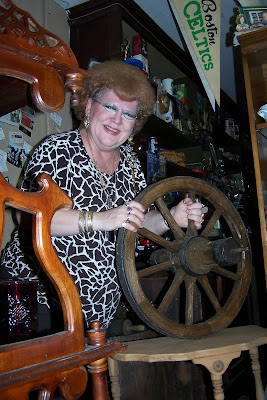 Steve is currently coveting this old German typewriter (if you look closely, it has the symbols on it, too): 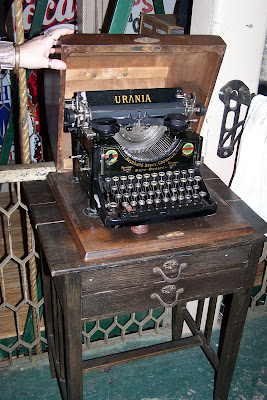 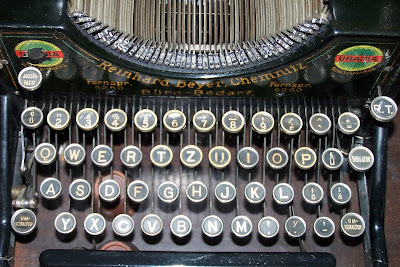 It's a beautiful piece and the table it's on is awesome also with two drawers (one with compartments) and a gorgeous ornate key.

These wooden churns were great too, and had all the right interior pieces: 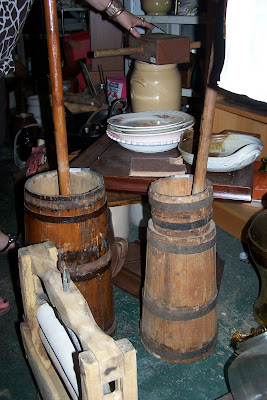 Right in the bottom left corner there is an old laundry wringer.  Thank goodness we don't have to do that anymore!

Look at this cute bunny; it came home with me: 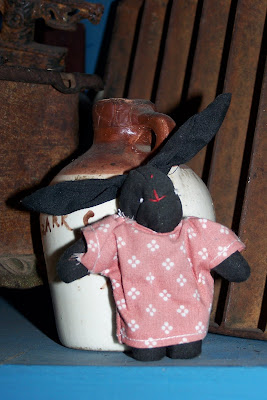 It's Christmas ornament size and will go on my tree along with the others I bought last visit.

A basket of books: 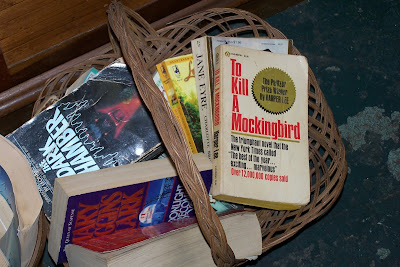 Or a dog in a basket? 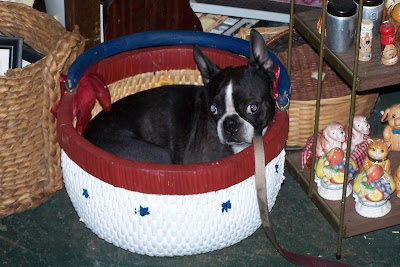 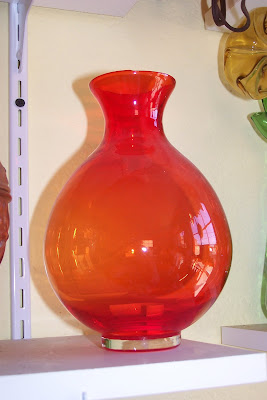 I didn't try, but I'm pretty sure these are too small for me; I liked 'em though: 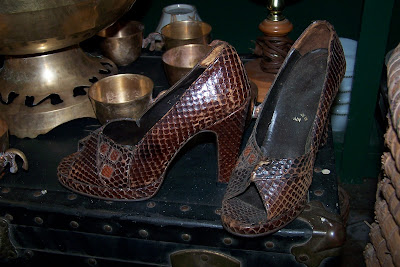 I'm wondering if this will get me into the Axis of Fedora: 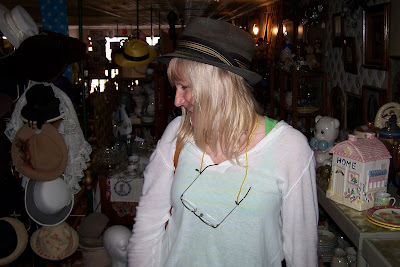 The nerd glasses on a cord might disqualify me.

How about some light reading? 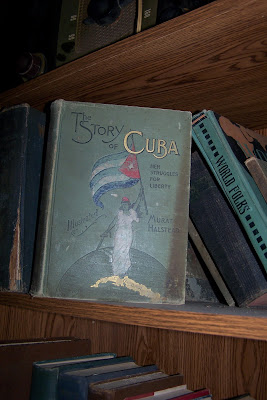 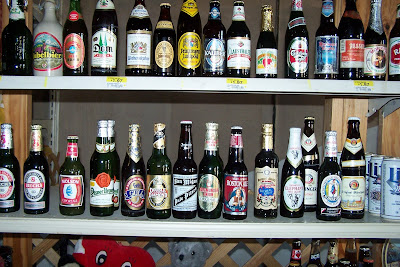 They're all non-potable, of course.  Just collectible bottles.  Milly had five boxes of these stuffed in a closet which we pulled out for her and put on these shelves; Steve sorted them by country and rarity.

These salt and pepper shakers are cute: 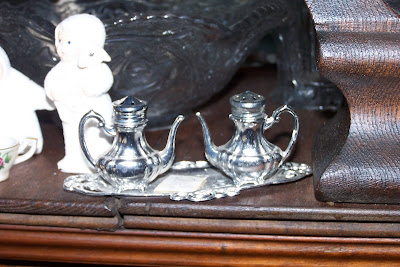 A gift for your liberal friends?: 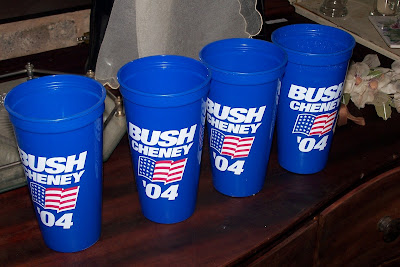 And these hand-painted Prince Albert tins are cute: 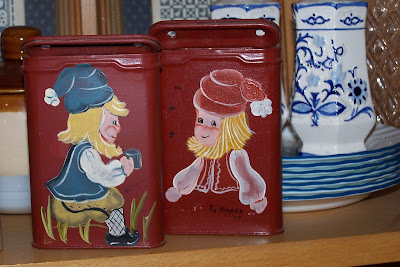 It was a fun day. Here are my little ornaments from last time and this time, the blue broach I bought today and an apple pin: 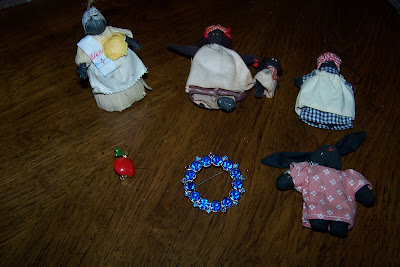 I also brought home my pretty vase.  As always, if you see something you want or are looking for something, call Milly.  The number for Second Hand Rose is 318.371.9830 and she's at 509 Main Street in Minden.  If you go visit, take a treat for the dogs!

Yes, yesterday was a good day.

Looking at antiques is fun, because I like history and it gives me a chance to look back at how things use to be. Plus I like to imagine who once owned the items, who they might have been, and what became of them.

What also made yesterday good was Pat and I met a lovely young lady who attended LA Tech, and we met a nice couple from Natchitoches. We got to see a dear friend, Milly, and spend time playing with her dogs Heidi and Rosalea.

The best part was the sexy blonde in the fedora, I got to take her home. LUCKY ME!