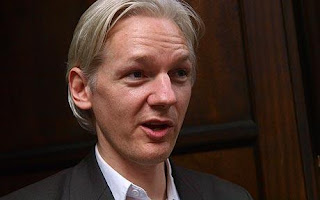 I wrote yesterday that my opinion of the WikiLeaks document drop this week is nothing short of pure treason.  Victor Davis Hanson seems to concur:

There has never been anything quite like WikiLeaks in American military history. We are engaged in a great experiment to see whether the U.S. military can still persist in a conflict when it knows that any and all of its private communications can become public — and will be selectively aired and hyped by people with a preconceived bias against it. Had the public known in real time from periodic media leaks about operational disasters surrounding the planning for the D-Day landings, intelligence failures at the Bulge or Okinawa, or G.I. treatment of some German and Japanese prisoners, the story of World War II might have been somewhat different.


Hanson points out that while Julian Assange claims to be dedicated toward "uncovering  bad behavior by governments around the world," he only  "targets the West."

Call me naive, but could someone explain to me how it's not treasonous when he's endangering the lives and revealing the secrets and methods of our U.S. military operations?

Hanson doesn't scream "treason!" as I do, but he does foresee trouble on the horizon for WikiLeaks:

But WikiLeaks is now flitting around within the red zone, and any leaks about Afghanistan or Iraq post January 2009 reflect upon a left-wing Obama government. A public perception of inappropriate military policy would endanger an entire far-left social experiment at home.


Yes, indeed.   As Obama has adopted many of the Bush policies in the war, and retained Gitmo, after all, and as WikiLeaks begins to release documents of that nature, maybe the NYT won't feel the need to publish this sort of thing any longer.  Certainly our military would be safer.
Posted by Pat Austin Becker at 6:30 AM

Assmange is an Australian so, technically, he can't commit treason against the US. He (and we) would still benefit greatly from him being hanged for crimes against the US, but his treason, per se, is up to the Australians to deal with.

Assmange could not do what he does except for acts of treason on the part of members of our military. We are at war and the service members should be hanged. Assmange is probably guilty of breaking some law that forbids materially aiding an act of treason.
If our executive branch lacks the will to protect our service members from some of the possible harm that comes from these acts they probably should not ask citizens to put their lives on the line in faraway lands.