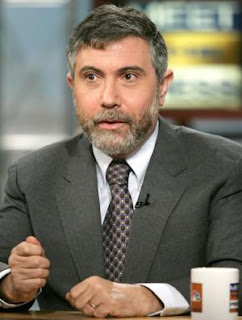 I wish I didn't have to rush off to work this morning and begin the Research Paper project with my sophomores this morning because I'd love to sit here for a bit and eviscerate this Paul Krugman column.

I thought I was hearing things yesterday when I heard Krugman on This Week say that Obama is a "moderate centrist" president.  WHAT?  What the hell is he talking about?  I mean, I know the far left is unhappy with Obama about a few issues, but "moderate centrist"?  No .... way.

Here’s what you need to know: The whole story is a myth. There never was a big expansion of government spending. In fact, that has been the key problem with economic policy in the Obama years: we never had the kind of fiscal expansion that might have created the millions of jobs we need.

Ask yourself: What major new federal programs have started up since Mr. Obama took office? Health care reform, for the most part, hasn’t kicked in yet, so that can’t be it. So are there giant infrastructure projects under way? No. Are there huge new benefits for low-income workers or the poor? No. Where’s all that spending we keep hearing about? It never happened.


Oh my.  I wish I had time to put on a pot of coffee and provide list after list, example after example of Obama's expansion of government and wasteful spending.  (And don't throw the errors of the Bush administration in here; I never, EVER said they were perfect either and have argued against the bailouts as much as anyone.)

Read the rest and then feel free to eviscerate Mr. Krugman in the comments.  This one just leaves me aghast and agape that anyone could print such nonsense in a national newspaper, even in an OpEd.  Truly the end of responsible journalism occurred long ago but if you needed more proof, this is it.
Posted by Pat Austin Becker at 6:40 AM

Oh, yeah, I think the high school teacher is the one qualified to speak.

Sorry, but your unwarranted arrogance is really showing.

And an anonymous rejoinder is what exactly? Courageous?

Sorry Dude, but Herr Doktor Professor Krugman is all wet. Keynesian stimulus has *never* worked. Ever. Spending even more money won't solve our country's problems. Maybe what Krugman should lament is the fact that Obama spent $787 billion dollars and he mostly wasted it on handouts to Goldman Sachs, GM, and the unions (both public and private).

We are now deeply in debt with no clear way out of the hole. Digging the hole even deeper isn't a viable option. Well it is, if your plan is to at some point repudiate the debt. That's what 3rd world strongmen do and we know how much Obama (and the NYT) love 3rd world strongmen.

Go ahead, tell me the IMF will ride to our rescue!

Yeah Pat, your arrogance is showing. How dare you question a Nobel Prize recipient.
These people are beyond reproach. Let's see:
Obama, recipient before he ever did anything. Good choice there.
Carter, recipient for eternal peace in the Middle East. Hmmm, still killing each other over there.
Gore, recipient for duping millions and bilking billions with a fraud called Global Warming.
Yep, your arrogance is truly showing for questioning a Nobel Prize recipient.
And the common denominator here is all recipients are a bunch of left wing hacks. And you are not allowed to question left wing hacks.