The Chilean Mine Rescue: UPDATED; LAST MAN OUT 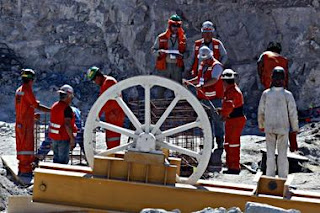 The rescue of the Chilean miners is underway; what a dramatic moment.

Michelle Malkin has a great post about the involvement of American ingenuity that has helped expedite this day for the miners who were, at one time, looking to a Christmas rescue date.

This is all reminiscent of the 2002 Quecreek mine rescue of course, and in a small way it reminds me also of the Baby Jessica rescue years ago.

I can't begin to imagine the drama that must be present at the site in Chile; Fox News is doing wall to wall coverage and reports "a thousand journalists" are on scene and "they all want the story."   I sincerely hope these miners are protected on scene and are shielded from the overpowering media deluge; they've reportedly asked for a couple of weeks to privately adjust and reunite with their families, and I'd say the press should at least honor that.

These guys have stuck together for survivial since August 5 and I expect they may want to tell their story together.

A black screen has been set up now in front of the deck where the capsule will bring the men up from 2000 feet.

There's a live feed here which is reporting that as each man arrives he will be greeted by three members of his family.  The extended family will have to wait.

Word now is that the capsule will first take a paramedic down; it's a 20 minute trip down and 20 back up, so the first miner, depending on conditions below and the assessment of the paramedic, may not come up for several hours yet.

Will update as news warrants.

Update 7:35 - The capsule is making a final test run now.  It has disappeared from site into the earth.

Update 7:56:  CNN also has a different angle video feed.  Family members are being taken to the rescue shaft.

Update 8:21:  The capsule has been sent down for another test.  Reports are that the atmosphere on scene has become celebratory as time nears for the first man to come up; video feeds show some wearing party hats in the colors of the Chilean flag.  Others are overwhelmed with emotion and shielding their faces.  The press is everywhere.  This is all likely to go on for some 36 hours or so as each man is brought up.

Update 9:05:  The first of two rescuers is heading down now.  When he has reached bottom, the capsule comes back up and the second rescuer goes down.

Update 5:00 a.m.:  I stayed awake as long as I could watching the rescue and saw the first two miners come up.  What a sight!  At this point, eight of thirty-three have now been rescued and things seem to be going smoothly; there's a long way to go still, but it's looking good!

Update 6:15 a.m.:  The New York Times has continuing coverage of the rescue with several multimedia items.  I just watched miner no. 9 come up; I think this one was the oldest of the 33 and had some breathing issues; he was a bit weaker than the others, but is okay.  He hugged his wife: that scene brought a tear to my eye.  She looked so worried standing there, waiting for the capsule to come through, for them to open the door, for him to come out.  She looked so stricken.  But when he stepped out and she could finally hug him she beamed.  It was just beautiful.  He dropped to the ground and said a prayer; she stepped back and when he finished she reached down and helped him back up in an embrace.  I couldn't keep a dry eye.

Update 7:37:  The last miner is about to go into the tube.  What drama this has been; I've teared up several times at these reunions.   Every one of these guys has a story and family and loved ones and oh my goodness.  The little girl of Pedro Cortez, one of the last ones out...she had those huge balloons and she just looked so overwhelmed and emotional.  Each story is amazing.  The whole drama has been incredible and I know they're probably already casting a movie.  The spirit and courage of all of these people is just unfathomable to me and quite inspiring.

God bless them all, and may they be in the continued thoughts and prayers of everyone in the days ahead.  They've still got a load road.

And with that, the tube with the last miner is leaving the floor.  Godspeed.

More at Memeorandum.
Posted by Pat Austin Becker at 7:00 PM

I've actually been to Chile before, and I was almost as happy to see the Chileans gathered around the TV sets or radios and clutching little flags as I was to find out the last miner had made it out safely.

I had to smile when I saw a photo of one enterprising kid selling Chilean flags in the town square of Copiapo this week...