The Cain Train Plows Ahead 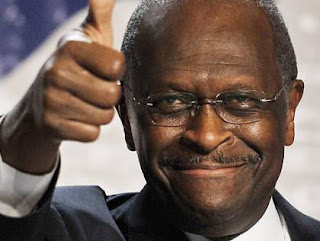 Herman Cain's momentum continues.  In today's Rasmussen poll, Cain takes the lead over Obama by a narrow margin:  43% to 41%.

Can he get elected?  Do we really want him to?  There are doubts about that 9-9-9 plan.

CNN reports in their poll that two-thirds of Republicans and independents are undecided.  Two-thirds?!  I believe it, actually.

I'm reluctant to completely write off Perry.  There's another debate tomorrow night; while Perry has already said (and demonstrated) that debates just aren't his thing, I'm still hoping he'll do something brilliant.

Stacy McCain is seemingly on The Cain Train and Stacy has good instincts.  He's the one who first pointed out Rubio to me.  And, Stacy is off to Las Vegas to cover tomorrow's Republican debate.

I have concerns about Cain.  I like him.  I think he'd be great in a Cabinet position.  I'm just not completely on The Cain Train yet.

So many Republicans are undecided.  It just reaffirms what I wrote a couple of weeks ago.  Republicans and conservatives in general are not completely content with the field; we'd like an amalgamation of qualities to create the perfect candidate!

Meanwhile, Obama ramps up his Anybody But Obama efforts by climbing back on his Canadian made bus for a non-political tour in which he bashes Republicans for killing his jobs bill in the Democratically controlled Senate.

I am really disgusted that people are dismissing Perry due to his debate performances though. I'm looking at records, not the ability to talk a good game.