Governor Jindal Causes Another Uproar With His Support of John Alario 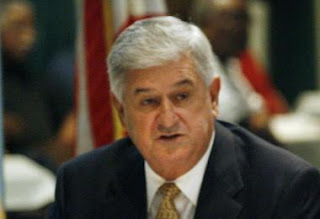 Conservatives all over Louisiana are already upset with Governor Bobby Jindal just four days after his landslide re-election victory.  Jindal came out yesterday in support of Republican John Alario for Louisiana Senate President.  Never mind that Jindal doesn't get to appoint a Senate president; that is actually up to the Senate. Jindal wants his preference known.

(Not only that, but he's interjected himself into the House Speaker race, too.)

Most of the nation (who already believes Governor Jindal is the next great hope) will shake their heads at this...."What?  What's the big deal?  Alario's a Republican isn't he?"

One of the chief objections to Alario is that he switched from Democrat to Republican in 2010 after 37 years in office.  Alario joined the Louisiana House in 1972 as a Democrat and served faithfully as a Democrat up until his switch in 2010.

As a matter of fact, Alario was House speaker for Governor Edwin Edwards (D) from 1992-1996;  even folks outside of Louisiana are familiar with Governor Edwards.  He was indicted in 1998 and finally convicted in 2001on 17 of 26 charges including racketeering, extortion, and money laundering, among other things.   Edwards was released from prison this year, just in time to marry his prison pen pal and third wife, Trina Grimes.  Edwards and John Alario remain close and Alario recently participated in a birthday bash/roast event for Edwards.  Edwards, by the way, is not impressed with Governor Jindal:

"I think he makes a good governor for California, Minnesota, Florida, all those places where people have been putting up all that money concerned who the governor of Louisiana is."

Ah, but the sins of Edwin Edwards do not necessarily reflect the sins of John Alario, (even though my mother always told me I would be judged by the company I keep), and so back to Alario.

John Alario was quite open at the time of his party switch about the fact that the switch was motivated by political expediency:  (emphasis mine)

But Alario said state politics also played a role in the decision; specifically, a desire to be Senate president next year, when Republicans are expected to take majority control of the upper chamber.  "Whether I'm a Democrat or Republican or the Whig party, I'd like to be president of the Senate," Alario said. Switching parties "certainly plays into the politics of the situation ... it doesn't hurt to be in that party."


In fact, Alario would be only the second Louisiana politician to be both president of the House and the Senate.  The late Senator John J. Hainkel, Jr. (who also switched to the Republican party) held both posts, and oddly, he was Speaker of the House when John Alario replaced him after Edwards was elected to his third term in 1983.

Alario has other skeletons in his closet although nothing that he's ever been nailed for.  In November of last year the conservative Louisiana blog The Hayride described a flyer put out by the Louisiana Republican Party in protest of Alario:

The flyer went into detail about a number of shady deals Alario has been involved in, including his son’s rather resilient career as a government bureaucrat despite the phenomenon of state dollars at times being redirected to various bookies thanks to the younger Alario’s nasty gambling habit. It also included a reference to Alario’s involvement in the River Birch landfill debacle – a classic case of a political shakedown Alario was involved in.


But, as The Bayou Buzz points out, Alario has been convicted of nothing.

Governor Jindal has made a few missteps during his tenure so far, the most nasty of which is the legislative pay raise issue. In fact, during that mess many Louisianans participated in a grass roots campaign to rip their Jindal bumper stickers off their cars and mail them back to the governor (myself included).  The short version is that Jindal promised during his campaign not to raise leges pay and certainly not during their own tenure.  Next thing you know the leges voted themselves a pay raise and Jindal said he would not veto it because he needed their cooperation to pass his agenda.

The populace was outraged.

Again, there have been other Jindal miscues but this one, this support of John Alario for Senate President, has many conservative bloggers and groups in a tither.

Why would Jindal even think of supporting a controversial lawmaker like Alario, who has directed millions of state dollars to his favorite projects in Jefferson Parish?

To me, and to many others with my tenure, John Alario is easily recognizable as the last active political leader of the Edwin Edwards erea, a dark and painful chapter in our state's history.  that Governor Jindal picks him for such a key leadership position just after Mr. Edwards' recent prison release is ironic, yes, but more to the point, deeply troubling and disheartening.  Any claim by Governor Jindal that Louisiana has by his service turned the corner in "ethics" or anything else positive is, by our governor's personal action, now loudly refuted.  Our governor's unreserved pride in this selection is, well, incomprehensible.


That this is an uncommonly bad prospect should go without saying. Alario was Edwin Edwards’ Speaker of the House when the latter was busy stealing the state blind, and Republicans in Louisiana at the time considered him as signifying everything that was slimy and corrupt about Louisiana politics. The backroom deals, the Chicago-style pay-for-play, the lack of transparency and the petty agendas lending a Byzantine quality to the formulation of policy rather than the honest debate of substantive ideas were what infuriated Louisiana voters into getting rid of Democrats, and Alario was neck-deep in all of it.

But when it became patently clear that Louisianans no longer had any stomach for the kind of Capitol politics Alario’s Democrats had on offer, he simply switched parties. After all, his sheepish defenders say, his voting record looks pretty good for business and he can make the case that he was a conservative Democrat all along.


The Dead Pelican has more.


So far it seems like Senate republicans are falling in line behind Jindal although Senator David Vitter is in opposition.  The Hayride is calling for statewide outrage against Alario similar to the action that forced Jindal to veto the leges payraise.

It is up to the Senate to pick their own president but Jindal is inserting himself into the process and for what reason?  Compromise?  Political expediency?   Most conservatives feel that Alario represents a throwback to the "good ol' boy" politics of pre-Jindal Louisiana and that this will ensure that Louisiana has not, in fact, moved far beyond that after all.  Jindal can tout "ethics reform" all he wants (even though Elliot Stonecipher says thats a sham), but if he thinks that supporting the only active legislator still closely connected with Edwin Edwards and the old regime, one who clearly operates out of the old corrupt system of Louisiana politics, is the path to "gold standard" ethics, well, he might not be the Bobby Jindal the nation thinks he is.

Jeff Sadow has comments as well.
Posted by Pat Austin Becker at 7:16 PM

I don't understand why you're surprised about the governor inserting themselves into the House/Senate leadership posts. Look into that further - they've almost always done this - letting it be known who their choice was/is. This isn't me trying to argue with you, really, just pointing out some long-time traditions

Clint, I'm aware this is a long standing practice; the objection is to the choice.

You got me with "joined the House in 1972", I have no faith in politicians "serving" for life, unless they are convicted in a court of law that is.....

-Quoted from and Linked to at:
Dwindle Jindal?

I suppose I only mentioned that because of your first and last paragraphs:

"Never mind that Jindal doesn't get to appoint a Senate president; that is actually up to the Senate."

"It is up to the Senate to pick their own president but Jindal is inserting himself into the process..."