Take a Trip to the Fourth Annual Barksdale Oktoberfest 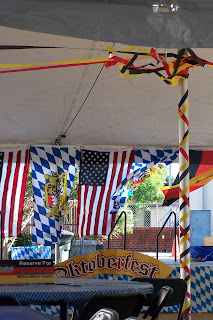 We have survived Barksdale Oktoberfest 2011.  And while we missed being the first to arrive by nine minutes, we were again the last to leave.  DJ Larry who comes on after the band shuts down noted that we are indeed his "die-hards."

The celebration gets bigger and better every year.  This is the fourth year that Barksdale has done Oktoberfest and it has improved a lot since that first year when they ran out of beer and didn't have enough taps.  That first year we spent most of our time in line for beer.

I'm terrible at estimating crowd sizes but I would not be surprised to find out that 2,000 people were there last night.  And while the event is great fun, it also is a huge fundraiser for Bright Holiday which sends Airmen home for the holidays.  We're more than happy to contribute to THAT effort!

This year Steve's son, Josh, was of age so we took him and his girlfriend, Heather, along with us. 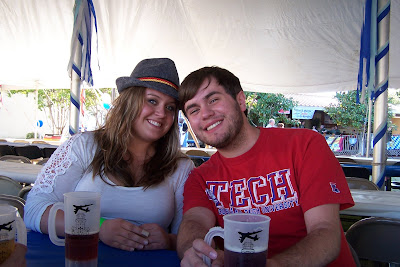 We checked out the decorations: 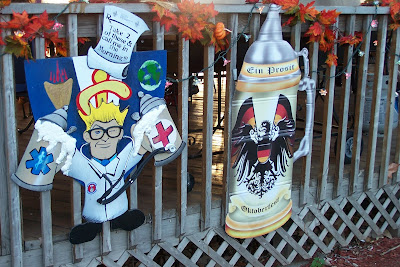 The event started at 4:30 and I took this early picture of the tents and assembling mob: 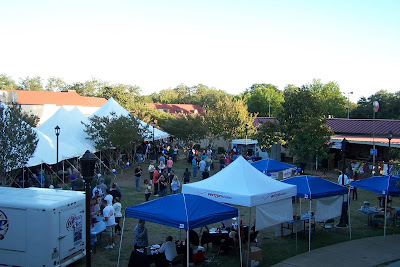 By the time it got dark there were no places to sit under the big white tent and the grassy area was crowded with people.  On the other side of the white tent, out of frame, is where the keg rolling contest was held in a roped off parking lot. 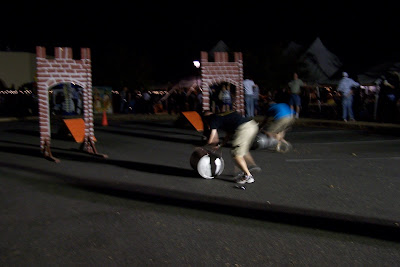 About 6:30 the buffet opened so we got our German meal:  schnitzel, sauerkraut, red cabbage, potato salad, bratwurst and pretzels! 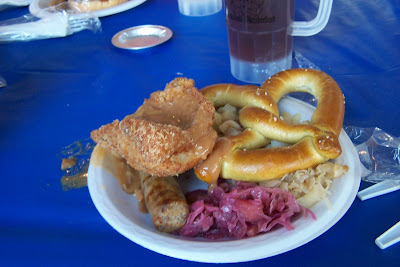 The food has improved a great deal since that first year!

This is me and my friend Rose; she was working the ticket table last night.  I look fat. 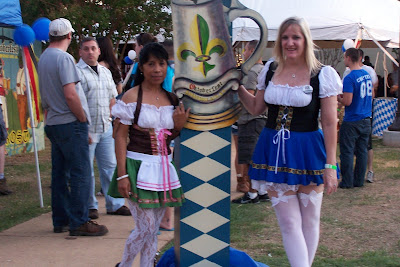 That's the only time my bow was tied all night; in every other picture I seem to be undone.  I tied that thing a hundred times.  Should have tied it in a knot.

I think the rest of the night we spent on the dance floor.  They had a costume contest.  I won it, but only because the girl in the cute checked dirndl didn't enter!  I got a bottle of red wine and a gift certificate to dinner at one of the casinos!  Humiliation has its rewards. 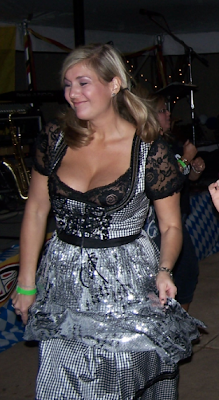 They didn't have the yodeling contest or the beer drinking contest this year.  Not sure why; those were fun!

But, we did the Thriller dance (I don't know how to do it, but I did my zombie impression.)  We did the Chicken Dance and The Hand Jive: 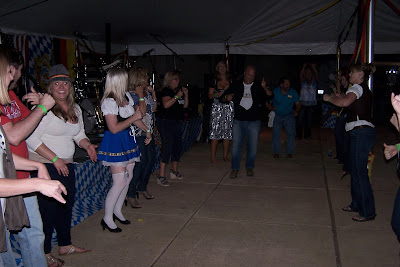 Every now and then we had to stop for beer.

Cute Maggie Martin, from The Shreveport Times, and her husband were there and they danced all night long!  She had her notebook and was taking down names; I guess she's doing a story on Oktoberfest for the paper.  I'll link it at the bottom of this post if and when she writes one. 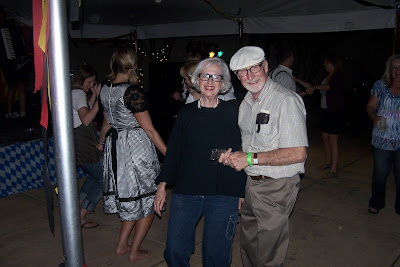 We also met an English Bulldog puppy who was all decked out for Halloween: 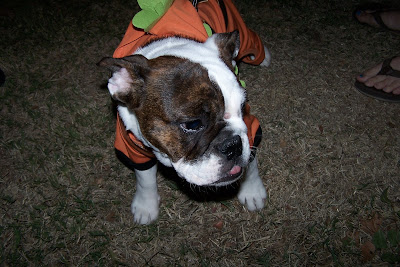 The band, Alpen Musikanten was great, as always.  Steve particularly enjoyed this reggae version of Edelweiss:

They've performed at each of the four Oktoberfests and I hope they're a lock for next year.  I hear that next year's celebration will be TWO days!  Whoop! 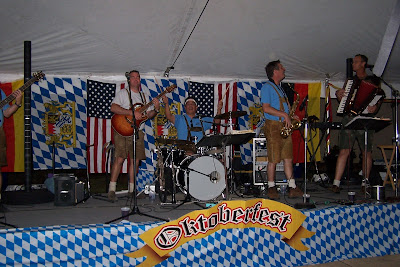 And so we danced the night away... 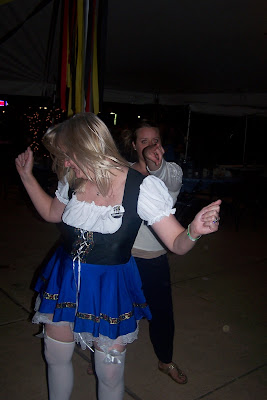 ...and we bought souvenir mugs and t-shirts.  We brought home big doughy pretzels.  We closed the DJ down and headed home sometime after midnight.

Another fabulous Oktoberfest is in the books!

Can't wait until next year!  My goal for next year is to lose ten pounds and keep my bow tied.

Yes, It was a blast, and I too am looking forward to next year's fun. You forgot one other goal: Learning to do the Thriller Dance.