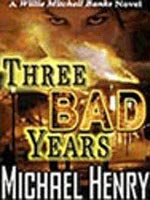 I've got a new author to share with you; well, new to me, anyway.

When Steve and I went to Natchitoches in June, J. Michael Kenny, owner of The Book Merchant, recommended a book by author Michael Henry.  J. Michael has never steered me wrong so I took his recommendation and purchased Three Bad Years.  I finally got a chance to read it in September (I'm a little backlogged in my reading stack) and liked it so much I went online and ordered the next book, At Random which I finished last night.  The book jumped to the top of my reading stack.

Both stories are tightly spun and are impossible to put down once you've started.  Willie Mitchell is described as "the last elected white politician in Yaloquena County"; he is as intriguing and believable a character as I've seen lately.  He's likable and smart, yet has faults like everyone else.  He jogs, he shops at the Jitney Mart with his iPod and a tumbler of vodka, he's happily reunited with the love of his life after "three bad years" of separation, and he's smart as a whip in the courtroom.

It looks like the next Henry books are co-written with his son and I'm curious to see how that changes things, or if it does.  Willie Mitchell's son, Jake, is going to come more into play in these next books which will be interesting.  I'm hoping Willie Mitchell is still a part of the plot, however, and that Mr. Henry doesn't abandon Willie Mitchell in favor of son Jake.  Jake hasn't won me over yet.  I like him, but I don't pull for him yet like I do for Willie Mitchell.  This will come in time.

At any rate, if you like John Grisham, or smart legal mystery/thrillers with likable characters and southern flavor, check out Michael Henry.  It won't be long before everyone discovers him and he's bumped Grisham and Connelly off the top of the charts.