Jumping Off The Cain Train 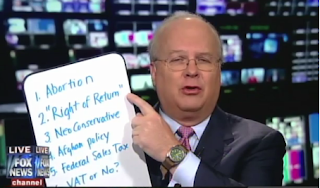 Herman Cain is feeling some front-runner heat.  He's running pretty high in some polls and is still riding the glory of the Florida straw poll vote.  But Cain is on defense today as "the architect," Karl Rove, comes after him with his whiteboard.

Rove was on Fox News this morning ticking off a list of Cain's misstatements:

"Cain has had a number of misstatements; I mean, we've had abortion, we had earlier this year he didn't understand what 'the right of return' was to Palestinian demand for the right of return.  He recently said he didn't understand what neoconservatives were when it came to foreign policy.  He had a rather odd answer on Afghan policy, basically, "I'll figure it out when I get into office." The federal sales tax, the way he handled it in the debate, I think it has created an image of him not being up to the task...That's really deadly."

Rove didn't have room on the whiteboard to document Cain's statements about releasing Gitmo terrorists.

The brouhaha about abortion was when he seemed to be pro-choice:

No, it comes down to is, it’s not the government’s role — or anybody else’s role — to make that decision. Secondly, if you look at the statistical incidents, you’re not talking about that big a number. So what I’m saying is, it ultimately gets down to a choice that that family or that mother has to make. Not me as president. Not some politician. Not a bureaucrat. It gets down to that family. And whatever they decide, they decide. I shouldn’t try to tell them what decision to make for such a sensitive decision.


Cain later back peddled and said he misunderstood the question and he is 100% pro-life.

Like Pundette, I find it disconcerting that Cain would misunderstand such a routine question:

But what bothered me about Cain's various statements about possible exceptions to the unborn's right to life was the incoherence of his answers to easy questions. This is a problem, regardless of his stand on abortion, hostage crises, or tax reform. It strongly implies incoherence of thought.


I'm not on anybody's train right now with regard to the Republican field.  I'm going to have to start winnowing them out though, and I'm cutting Cain loose. 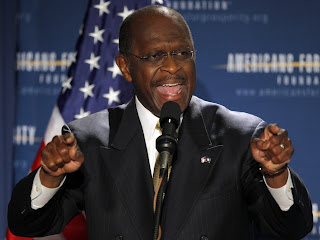 I'm not doing this based on anything Karl Rove said, mind you.  My misgivings about Cain go as much to his total lack of foreign policy experience as it does to his bungling of routine questions.  I'm about to decide that Cain will make a great addition to somebody's Cabinet but I'm cutting him off of my short list for the top prize.

But the ‘stan shtick is a glimpse of the greater truth – that there are whole areas of public policy in which he simply has no interest. None. You ask him a question and from the recesses of his mind swim up half-recalled phrases from some panel discussion he caught once long ago, and he hopes he grabs the conservative line (“I’m proud to stand by Israel”, “we don’t negotiate with terrorists”, “life begins at conception”, whatever) but just as often he doesn’t (with Gretchen Carlson this morning: “No, abortion should not be a part of the political discussion”).


To be sure, the field is filled with unlikeable choices and, just like 2008 it seems, we'll have to hold our noses and pick one of them.  Maybe this isn't as bad as all that but I'm ready to start thinning the herd a little.

I'm jumping off The Cain Train and making more room there for Stacy McCain and Cain's other supporters.  He's a likable guy and highly amusing.  He'll do just fine in a Cabinet post.

I'm not yet jumping off the train, but am more apt to now. Did you see the Townhall Spotlight ad that came out on his behalf? Repeated old media lies about Rick Perry. Up until now I've been giving Cain the benefit of the doubt, but if he doesn't start standing tall and refusing to use these old political dirty tricks, he's lost my support. We want the truth, which most of our front runners seem to be having a problem with.

Cain is not a politician, that is why I like him. He does not know how to frame his words to not say anything or put a positive spin on junk. I think that Romney is just another Obama, maybe a little less of a communist, but still a progressive. Perry is another Bush. I would really like Paul, but the media will not allow that. So Cain seems to be the man.

We'll leave a seat and the light on for ya.

*sigh*. Thanks, Anon. I don't think I'll need it, but you never know. Stranger things have happened.