Why Does Governor Jindal Need to Politicize the Louisiana Veterans Honor Medal? 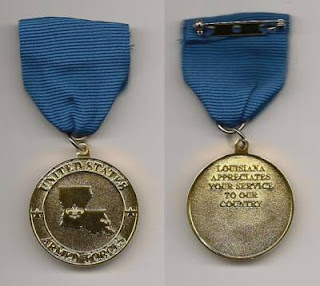 I don't know if you've heard, but Governor Bobby Jindal is running for re-election in Louisiana.

During Jindal's administration in 2008, he did a very neat thing:

The Louisiana Veterans Honor Medal was created by Act 695 of 2008 Louisiana Legislature.  The intention is to recognize and honor all Louisiana veterans.  One side of the medal bears an outline of the state and the words, “United States Armed Forces.”  The flip side  reads, “Louisiana appreciates your service to our country.”  All medals may be worn over the neck or pinned on a jacket.  Some medals are distinguished for veterans killed in action or wounded in action; others designate veterans who were prisoners of war.


Governor Jindal has been traveling the state ever since giving out these medals.

Would I be going out on a limb here to assume that most veterans who received the medal were honored and simply grateful without suspecting they'd be used in a campaign ad?

Governor Jindal did a really nice thing; now why is he politicizing it?  To me, it seems to take away from the sincerity of the gesture.  Or is that just me?

I saw this coming when he started traveling around handing them out himself. I remember a case, not the details, about a vet who couldn't make it to the Jindal presentation and rather than just send it to him, they told him he'd have to wait for the next local affair. Finally the head of the State VA Affairs presented it to him. I was optimistic when he was elected, but I believe he is all about self promotion and running for the next office he has his eye on.

I don't really see anything wrong with it, especially if those guys gave permission. Like the guys who backed Bush in '04. What were they called...

I was, and still am, proud to receive my Louisiana Veterans Medal. During the ceremony Governor Jinal praised us for the sacrifices each one of us made in our lives. It was not a political and wasn't meant to. But to use handing out the medals, which was made possible by a bill passed through the legislature by Senator Robert Adley, has somehow cheapened the meaning of the medal for me.

A month ago, I heard a really truthful political ad from Jindal. It went something like "more government for less money". That is exactly what I think of Jindal. He is a big government liberal.

If you haven't noticed, under Jindal, you can't get medication that you might need. He has stepped up restraint of pain medications to legitimate users of the drugs. Ultimately everyone reading this will need to take medications for pain after surgery or for chronic back problems or for cancer. Only Jindal feels that criminals are getting the drugs and selling them. Instead of attacking the criminals, he is prosecuting doctors who give out more pills than necessary. The only thing is that you don't know what is too much until you are in jail and often you patient would disagree with what is approriate for their needs. But the government and Jindal don't care, it just looks good and that is what they want. The real solution would be to get the government out of health care and drug distribution completely (except for quality of drugs). But the progressives will not allow that.