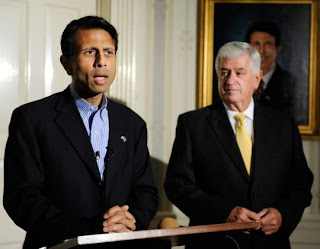 Just as critics of the recently approved Amendment No. 1 predicted,, Governor Jindal is making plans to ask the legislative budget committee to establish a new slush fund for "economic development" when the Legislature meets next year.

The constitutional amendment, approved October 22, was approved by a 69.6% to 30.4% margin.  It changes the state Constitution to make permanent a four-cent cigarette tax, a tax increase that was to expire next year.  The Legislature had previously attempted to extend the tax as a separate measure, but Jindal vetoed it as a "tax increase."  The amendment also changes funding for TOPS, the Louisiana merit-based scholarship program which benefits about one-third of Louisiana's full time college students.

The Millenium Trust was established in 1999 and  holds the proceeds of tobacco settlement the State of Louisiana receives.  The Trust funds TOPS and two other educational programs, one of which would receive the revenue from the four-cent cigarette tax.

Back to the Amendment: it takes about $40 to $45 million per year that has annually been deposited from the tobacco settlement into the base monies of the Trust and moves it straight into TOPS. The base amount of the Trust would be frozen.

The result is that funding for TOPS will rely less heavily on the general fund.

This amendment and companion legislation would redirect annual tobacco settlement payments ($40-45 million per fiscal year) that currently are deposited into the Millennium Trust and place them directly into the TOPS fund, beginning with proceeds received after April 1, 2011. This change would provide a new dedicated revenue stream for TOPS. The proposal allows TOPS to receive two payments – totaling about $80 million – from the tobacco settlement during the current fiscal year and single payments in subsequent fiscal years

Of this amendment, C.B. Forgotston recommended a "No" vote:

It’s not about TOPs it is about giving more of our hard-earned tax dollars to the governor and the leges to waste. It really about a tax increase which can not be lowered or repealed without another amendment to the constitution which we will have to depend on the leges to put on the ballot.  This is a very poor precedent to establish in a state that badly needs tax reform.
We shouldn’t be forced to address two separate issues in one amendment. Tell the leges to do it right and stop playing games with our constitution.


Now that the Amendment has passed and the general fund will bear less of a burden to support TOPS, Jindal wants that $80 million for a slush fund for "economic development":


Jindal’s spokesman, Kyle Plotkin, said the governor will ask a legislative budget committee to approve money for economic development projects as needed from the $80 million.

When the Legislature meets next year, the governor will ask for the balance of the money to be deposited into an economic development megafund, Plotkin said.

The megafund is designed to provide incentives for businesses building large projects in Louisiana.


The plot thickens when you realize that Louisiana is facing a potential budget crisis contingent on the outcome of a lawsuit filed in response to the leges taking $198 million from the Rainy Day fund two years ago without replacing it.  Should the State lose that lawsuit, they'll have to pay back $150 to $200 million to the Rainy Day Fund, some of which would have to come from the $80 million slush fund.

Does it surprise anyone that John Alario was the sponsor of the Amendment?

It seems to me to be just a shell game with the State's money.

I might be mixing apples and oranges here, but with the leges record of funding NGOs and designating pet projects for their districts with state money, something Jindal said he would NOT allow but certainly has (extensively), I'm not convinced that we need to designate another $80 million for anyone to play with.

If the leges believe that a new fence in a private subdivision in New Orleans is a wise use of state dollars that "benefits the entire state," I can only imagine what they will decide to do with $80 million toward "economic development" or "incentives" to entice businesses.

What a disappointment he's turning out to be... not exactly the Next Great GOP Hope apparently

Bobby Jindal will be to Louisiana what Bill Clinton was to Arkansas; build a political resume for the national stage and be gone; forever. Much of what he has done has been positive, but the bottom line is that it's all about Bobby Jindal, NOT Louisiana.

Bobby Jindal will be to Louisiana what Bill Clinton is to Arkansas. He will build his resume for the national stage and be gone. While he has accomplished some positive things, it is ALL about him, NOT Louisiana.

Except Clinton did a good job

Some of these settlement payments from the tabacco companies should go towards fixing the debt.