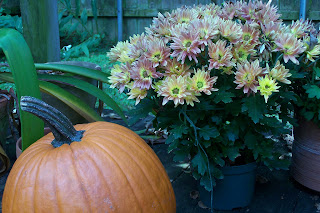 Fall has arrived in north Louisiana, finally.  A decent little cold snap came through and I've pulled out the sweatshirts and put on a pot roast.  Further signs of the season appeared as I shopped for a few essentials at the grocery store this morning.  The "holiday baking aisle" has appeared, filled with marshmallows, candied fruit, evaporated milk, cans of pumpkin, and spices like cinnamon and nutmeg.  (Halloween hasn't even arrived yet, but hey, who cares?)

At Chez SIGIS this weekend we're keeping it low and quiet.  The next three weekends are pretty busy so we're resting up.  Next weekend, November 5, is the Michael Henry book signing at Barnes & Noble.  You don't want to miss that!  Friday and Saturday, the 4th and 5th, is the annual Main to Main Trade Days which runs for 35 miles from Springhill to Cullen, La.  (Milly Rose will be super busy!)  The week after that, November 12, is the Fasching celebration in Minden.  This year there will be ice skating, German food and entertainment, and a beer exposition (so you KNOW I'll be there.)

Finally, the week after that, on Saturday the 19th, is the annual Highland Jazz and Blues festival.  The headliner this year is the Preservation Hall Jazz Band.  More on that coming soon.

So.  We're resting up this weekend!

The Camp of the Saints graciously linked our Jindal post this week.  Bob also links to Stacy McCain's rant against the conservative establishment and adds his own two cents.

Chad Rogers at The Dead Pelican also linked my Jindal piece.  He's got more on The Alarios.

Right on the Left Coast is outraged over the political correctness police targeting Halloween costumes.

Reaganite Republican has the bad news on Mitt Romney.  "The devil is in the details."

The Daley Gator is keeping up with the Occupy Wall Street rap sheet.

Doug Ross is keeping up with all the "government-authorized theft of taxpayer dollars in the name of 'green energy'".

Pundette is keeping up with Cain's ever morphing position on abortion.

The Other McCain is reporting from Annapolis this morning at the MDCAN.

PoliticalJunkieMom has her chips on Rick Perry.  Interesting!

Wyblog's Weekly Jobs Report informs that Whirlpool is cutting 5,000 jobs.  I missed that.

And finally, Pecan Corner is baking bread.  See?  Signs of the season!

Off to sit on the deck, enjoy the fall weather, and make a dent in my reading stack.  Hit the links, people.