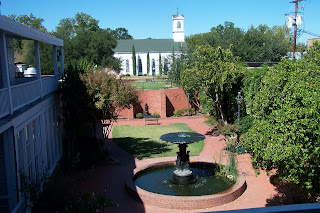 Correction:  It's been brought to my attention that I've misidentified a store in this post.  The store with the unfriendly proprietor is not Collectible Memories but is instead Jefferson Bottling Works (see the comments).  They're right next door to each other.  Apologies from SIGIS to Collectible Memories!

Fall is the perfect time to visit Jefferson, Texas.

Steve and I have just returned from a 24 hour getaway that seemed like three days, and I don't mean that in a bad way.  Time just seems to slow down in Jefferson.  We did something this trip that we've never done before:  we spent the night at the historic Excelsior House hotel.  That's one thing about Jefferson that we love - its rich history.

We hit town about 12:30 yesterday after a scenic drive down La. Hwy. 2 which takes us on into Texas.  We like to go that way because it's a prettier drive than interstate and time wise not that much different.  We parked in front of the hotel on Austin Street and didn't get back into the car until it was time to head back to Shreveport.

The Excelsior House was built by riverboat captain William Perry in the 1850s and has been in continuous operation ever since.  There are only 15 guest rooms; you can take a virtual tour here and see how gorgeous it is.  Famous visitors include Ulysses S. Grant, Rutherford B. Hayes, George W. Bush, astronaut Jim Lovell, and Oscar Wilde. 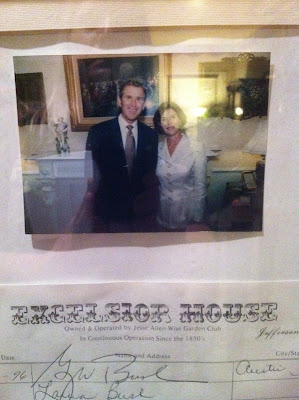 The lobby is beautifully furnished with period antiques and has plenty of seating for guests or visitors to sit and enjoy the atmosphere.  There's a long display case along one wall with the guest registers of famous guests on display. 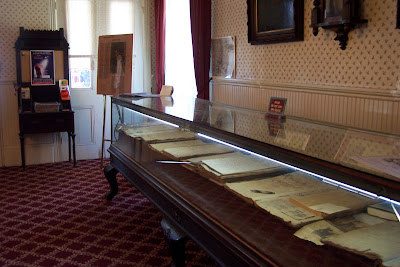 A plus:  the rooms have real keys!  I hate those plastic cards.  When you check in you get a key to your room and a key to the front door of the hotel because they lock it up at 9:00.

We checked out our room and dropped off our luggage before getting lunch and hitting the shops.  To get to the second floor we had to climb a narrow, curving staircase which then deposits you on a long narrow hallway.  Steve said it reminded him of something out of Gunsmoke: 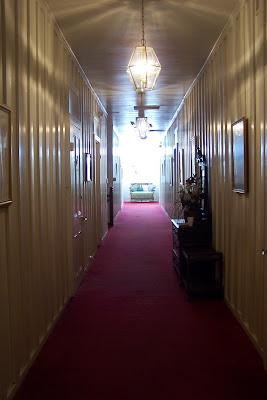 Our room was lovely;  it was long and narrow and furnished with antiques. 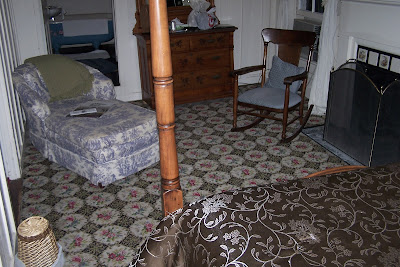 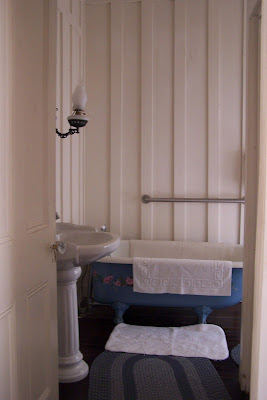 We took a quick peek at a some of the other rooms that were open.  This is the Ulysses S. Grant room (you can see it better on the virtual tour, above). 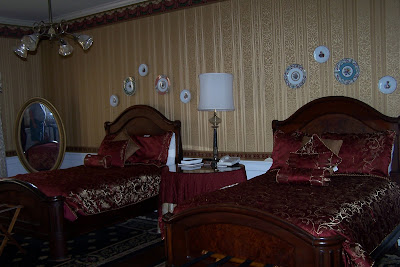 This was another of the deluxe rooms: 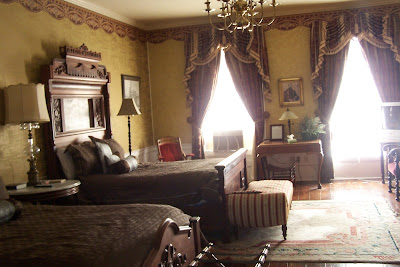 We sat on the back balcony for a few minutes... 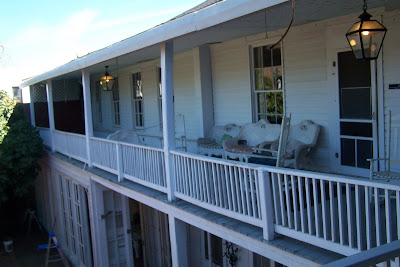 ...and finally headed out for lunch.

We ended up at The Hamburger Store on Market Street.  We'd heard the food was good and it's always crowded so that was a good sign.  What we saw when we walked in just blew our minds: 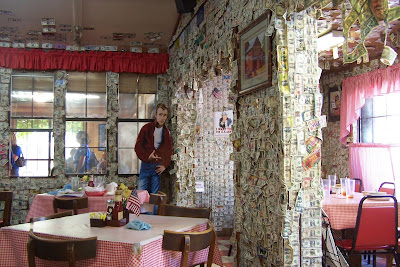 On every single wall in the place are dollar bills.  Decorated, colored, folded, autographed, you name it, dollar bills are stapled to the walls and are creeping across the ceiling.  You can read about the genesis of this tradition here.  The most recent estimate is that there is about $8,000 on the walls. 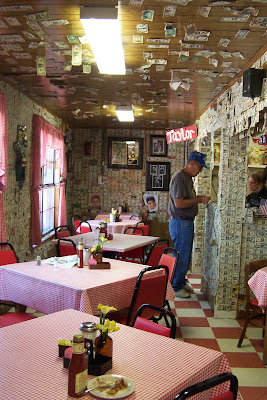 We amused ourselves while waiting for our food by reading the bills.  We both ordered cheeseburgers and fries; I got the bacon cheeseburger and Steve's was mushroom/swiss.  We both had raspberry tea.  The burgers were outstanding: 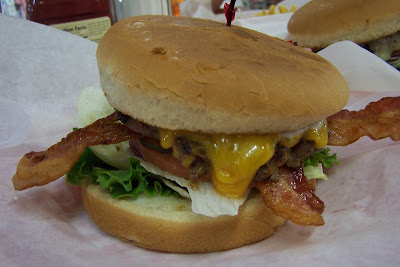 They had some beautiful looking pies but we passed on dessert.

Time to shop.  For the most part, the shop keepers in Jefferson are all friendly and always ready to visit with you, ask you where your from, and help you find what you're looking for if you need help.  Many of them have shop dogs or shop cats!

One of my favorite places to go is the huge antique mall at the end of Austin Street.  I think it used to be a feed mill; it's across the railroad tracks at the end of the dead end.  You can spend the entire day in there if you wanted to: 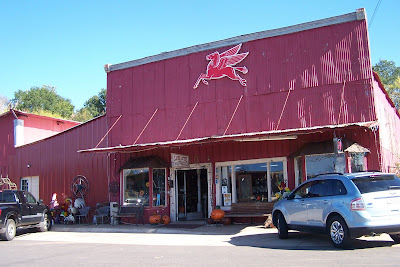 It just goes on forever: 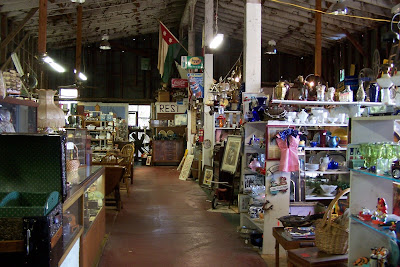 I was thrilled to find this Pyramid pattern bowl in there.  Not a chip or scratch on it! 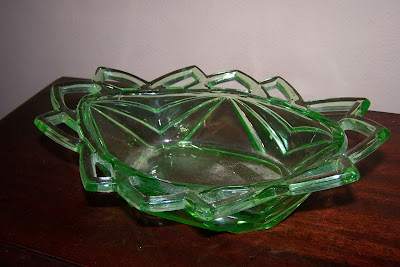 I thought these old canisters were cool: 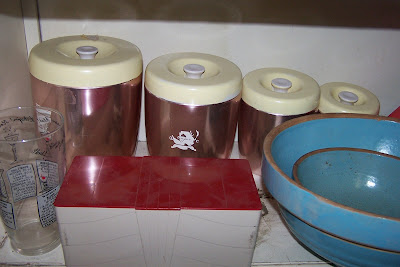 They were about $40 and I didn't want them that bad.

But I did fall in total love with these jadeite canisters: 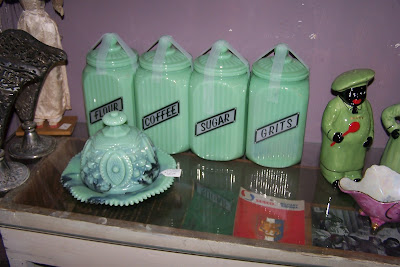 We can never visit Jefferson without a trip to The General Store. 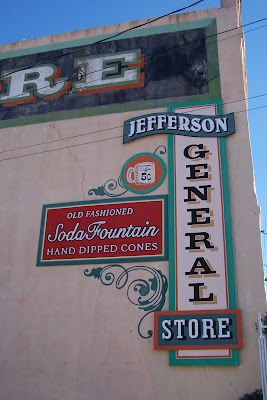 It's arguably the most crowded shop in Jefferson: 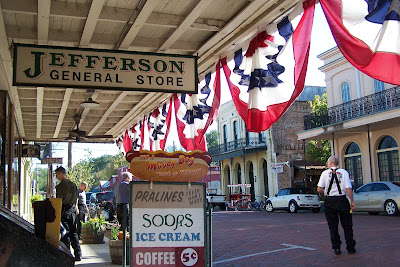 In fact, it was so crowded we were thrilled to discover later that evening (when I realized I needed a Diet Coke for in the morning) that they stay open until 10:00.  When we went back at 8:30 or so it was much less crowded and we could really explore.

They have lots of jellies, syrups, relishes and old fashioned candies, among other things. 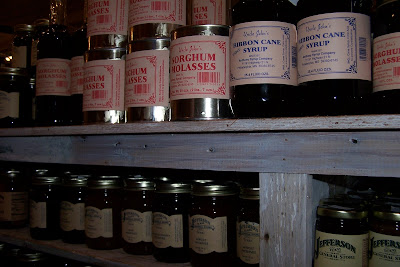 They have a great Chow Chow relish that we always stock up on.  Between the crowded afternoon visit and the not crowded evening visit later, I bought two books (one on Jefferson history), salt water taffy, cranberry preserves, and some goat milk lotion.  Steve got his Chow Chow.

Throughout the afternoon we visited several antique shops.  There was one shop, Collectible Memories, on Polk Street, where you could spend hours digging through costume jewelry: 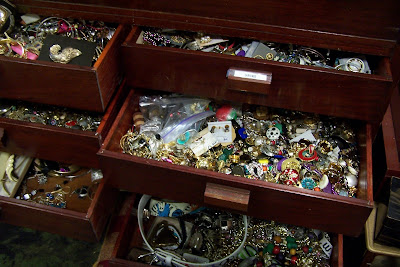 or staring into the display cases at all the interesting things... 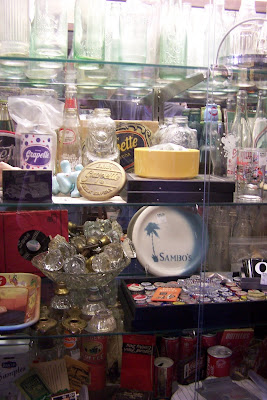 ...but of all the shops in Jefferson, I don't recommend this one.  The proprietor wasn't especially friendly and we noted that his prices were much higher than anyone else for similar items.

We wore ourselves out and took a break at Auntie Skinner's Riverboat Club in the late afternoon.  We sat at the bar and had a beer and rested up a bit.  We watched some baseball and talked with some other patrons for a while.  The bartender, Alice, provided excellent, friendly service and we spent an hour or so there before heading back to the hotel to get ready for dinner. 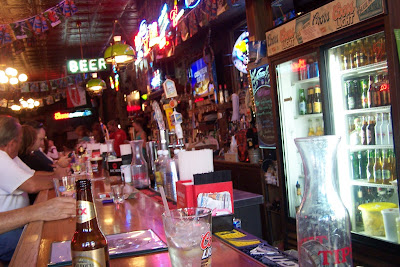 We returned to Auntie Skinner's for a light dinner; I had potato skins and Steve had salad and buffalo wings.

The night was cool and clear so we took a long walk through town.  We met up with another couple who was also walking the same direction we were and we fell into conversation with them as we walked along.  Everyone we met in Jefferson, for the most part, was so friendly!  We peered into windows and planned our stops for the next day.

They were doing the annual Ghost Walk  so we kept crossing paths with this mob of people walking through Jefferson listening to the tour guide tell stories of haunted Jefferson.

We returned to the hotel and sat on the upstairs back balcony overlooking the courtyard for a while, just listening to the sound of the trains rolling through town and the shouts and laughter of a couple of guys who were throwing a frisbee in the street nearby.

Day Two began with the Plantation Breakfast at the hotel.  I'm not much of a breakfast person but this was a memorable breakfast!  We were ushered through the french doors into an elegant dining room, again, furnished with beautiful antiques and a grand piano.  We were seated on the sun porch which had brick flooring and looked out onto the courtyard.  Our table was already set with fresh fruit and orange juice: 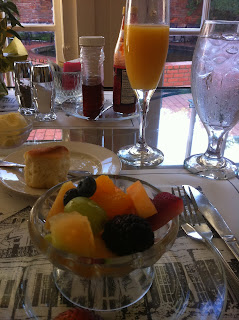 Steve says sometimes we act like "country comes to town" when we go places because we so enjoy the little details and effort that places like The Excelsior do.  We oooo and ahhhh over things.  I loved that the butter was in a nice little dish and not in a plastic rack in single serving pats covered in foil.  I liked that the jelly was served in a little jelly dish and not in plastic single serving squares.  Just the little things.

The server, who beamed with friendliness and hospitality, appeared and offered coffee.  Before long she brought out our food (you never saw a menu, this is just what breakfast is...): 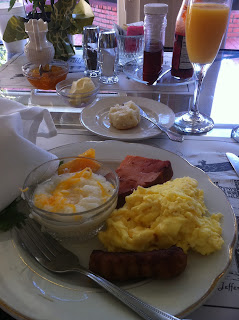 Scrambled eggs, sausage, a thick slice of ham, and grits with cheese on top.  We had a basket of orange muffins and the most delicious homemade biscuits I've ever eaten in my life.  Like I said, I'm not a breakfast person, but I consumed the entire thing except for some of my eggs. 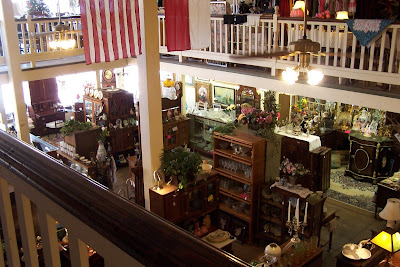 ...and bought a few things.

I got this pretty Mosser Jadeite cream & sugar set: 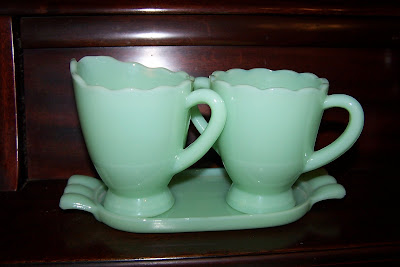 and I bought this red and white enamelware cup and dipper: 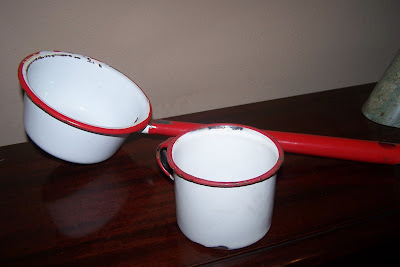 We got some other little odds and ends.  A crystal salt dish.  A Boston Terrier pin.

All in all it was a wonderful 24 hours and we're already planning our next trip. 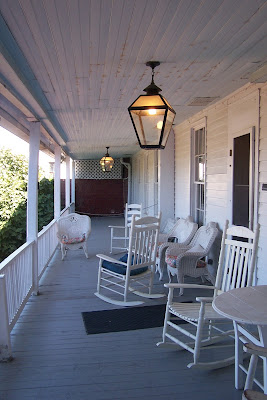 That looks like a great trip. Mike and I are always looking for weekend get away places...I'm adding this to my short list! (This is Blah Blah Blah on MikeAT's account...too lazy to log into mine!)

You guys ought to go during the Boo Run; they had 35,000 bikers there for it this year!
http://www.boobenefit.org/

Since not too many people has commented on this blog, I will add my two cents. First, I had a wonderful time. Secondly, I had an awesome companion.

The comment made on the store (Collectible Memories) is not factual. The store you were referring to is Jefferson Bottling Works. We would like for you to please correct the information as this store is not the one you intended to write about. We are new in business and have had nothing but positive reviews, and welcome your visit to our store with your camera. Our contact information is 903 665 9960, email cllmem@yahoo.com. Thank you for your time.