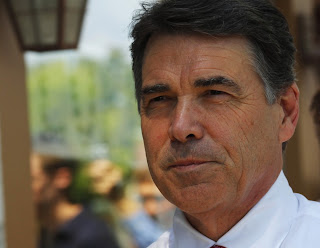 So Rick Perry's father painted over a racial slur on a "slablike rock" and turned the rock over.  All of a sudden, WaPo is perpetuating the Perry is a Racist meme because the rock exists and because some idiotic locals named the area long before Perry ever became associated with it.

Never mind that Perry had it painted over.

It was THERE!  Guilty!  RAAAAACIST!

And Al Sharpton, who continues to beclown himself, says:

“At worst he either thought it was something he could identify with and even have some bit of irony,” Sharpton said. “At best, he’s insensitive. How can someone who would seek the highest office in the land be so insensitive to the implications of that name?”
Sharpton predicted the issue will harm Perry among Republicans.

Seriously?!  When did Al Sharpton gain the ability to know what Rick Perry is thinking?  How does HE know what Rick Perry thought about that rock?  Perry had it painted over, Sharpton, or did you miss that?  Should he have had it ground into gravel?  Would you be happy then?  I doubt it.
And dear all republican African-Americans:  You are now insubstantial, according to Sharpton.
What a disgrace Al Sharpton is.  He's set race relations back sixty years all by himself.
Now he's getting help from The Washington Post.
Posted by Pat Austin Becker at 4:58 PM

This is a fairly stupid story. I just hope that it does not help Perry in any manner. He is not a conservative.