Quote of the Day: HE Says No! 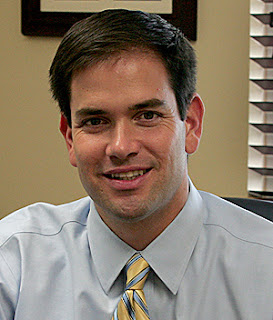 “I’m not focused on that,” he said. “I don’t crave it. I wanted to be a United States Senator. I didn’t run for the Senate as an opportunity to have a launching pad for some other job. I think one of the things that I lament is that people somehow come to the conclusion that United States Senator is not enough. Listen, the United States Senate is still an important, I think very important institution.”

Rubio said that a Senator can never get big things done in the Senate if they are “focused on it as a some sort of a launch pad for something else.”

It's nice to know that character still exists.

If only Zero had not thought of the US Senate as a mere launch pad for high-end vacations and weekends at the links.

I like Rubio very much, but disagree with his decision. He is exactly what we need to inject life into the ticket, appeal to young people, appeal to Hispanics, and appeal to conservatives in the event Romney wins the nomination.

Sometimes duty must take precedence over personal preference. For the good of the country, he should at least be open to the Vice Presidential nomination.

By the way, I'd say the same of Paul Ryan, a guy who was my first pick for President. He and Rubio are far superior, both in terms of ideas and chances of winning, than anyone currently running for the GOP nomination.