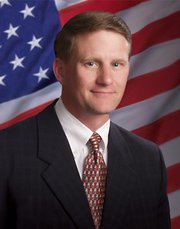 My good friend and most excellent state Senator, Buddy L. Shaw, is not seeking re-election for District 37.  He's not term limited, he's just not seeking re-election.  He has worked hard for Louisiana for years in both education and in political service and I don't begrudge his retirement one bit.  I do hate to lose him in the senate, though.

Running for his seat on the Republican ticket are Barrow Peacock and Rep. Jane Smith.  Rep. Smith is term limited but apparently not ready to go home.

SIGIS is endorsing Barrow Peacock in this race. He's a conservative Republican and I believe right for the job.

Rep. Smith has made some bad votes that preclude my support for her.  She voted FOR lifetime benefits for legislators who have served ten years or more.  To my mind, public service is just that:  public service.  It's not a career, or shouldn't be, and it should not be your source for lifetime benefits.  Seems egregious to me.

She voted in favor of the unions in HB 204 to conceal the collective bargaining process from taxpayers.

Via Northwest Tea Party Alliance, she voted FOR all of these tax increases:

She also voted to extend legislators terms, for private insurance companies to pay for contraception and abortion pills, and against school choice.

This week I received a mailer from her campaign in which she says her opponent, Barrow Peacock, is "open minded" about abortion and marriage, totally misrepresenting what Mr. Peacock has publicly stated:

SIGIS thinks it's time for Jane Smith to retire.  Vote for Barrow Peacock.

Added:  In an email from Mr. Peacock he assures me, "I am Pro-Life and believe marriage is between a Man and woman."  Conservative values.  Jane Smith "is lying" about his stance on these issues, he says.

I believe she is.
Posted by Pat Austin Becker at 4:54 PM

I agree with everything you said. I too will vote for Peacock.

Shreveport is dying (losing population) while Bossier is growing. Barrow Peacock is based in Shreveport, Jane Smith in Bossier. Shreveport represents decay and the past. Bossier represents growth and the future. That's why I'm voting for Jane Smith.

This article is so profoundly biased that it is absolutely unpalatable. "Smith is not ready to go home." ? Perhaps the people of Shreveport/ Bossier are not ready for her to go home. We need her in Baton Rouge fighting for the good of North Louisiana, like she has for the past twelve years. Peacock has absolutely no experience, and at every turn he has taken the opportunity to slander the good name of Jane Smith, while inaccurately quoting her voting record. Jane is a real conservative, but she also fights for the people of Shreveport/ Bossier. Politicians are not in the job for the money. They get paid as much as school teachers, a profession in which Jane has experience, so when people get mad about someone working long hours to make life for us in North Louisiana more bearable, trying to get the benefits they deserve, I am enraged. Thankfully, people do not take stock in what a low traffic blogger has to say about politics. Your bias against Representative Smith discredits you as a viable source of anything other then ignorant opinions.

@rzcc: thanks Jane, thanks for playing!

@rzcc, "low traffic blogger?" LOL! How did you travel this way?

Sorry I've been gone all day and missed this:
"This article is so profoundly biased that it is absolutely unpalatable."
Duh. It's an endorsement.

@Jim
A credible endorsement weighs the pros and cons of each candidate, explains its reasoning based in fact, and then suggests a candidate. Endorsements are a process that can be done well, or poorly. This is done poorly,
@Rick
I painstakingly looked to see of anyone, and I mean anyone was dumb enough to contradict or wildly popular Governor's endorsement, and the endorsement of the far more credible Shreveport times. It took a while, but I found this poorly designed website, and chose to take the time to easily lambast this article for its clear lack of intellegence and utter irrelevance.

RCZZ, Wow! What intelligence you must possess. Have you thought that one reason Barrow Peacock's voting record isn't compared to Jane Smith's record is Peacock doesn't have one. If he did I'm sure I would have compared his record to the dismal one General Jane possesses.

Jane had her chance and as far as I'm concerned she's done enough damage. It's time to try someone else, and if that person is as bad a Jane Smith, the will need to go hmes, too.

Okay, I can't let it pass.
"This poorly designed website".
You're an asshat.

"Wildly Popular Governor?" "Credible Shreveport Times?"
For the sake of those around you I hope you sprayed the room after blowing those out of your a**!

I lost respect for Jane Smith when she sent out that dishonest flyer. That is the kind of gutter politics that we need to leave behind as we try to improve our state.

@ Rick- Name one way in which your life has suffered as a direct result of Jane Smith's time in the State Legislature. Here is betting that you can't. The simple fact is that all Barrow wants to talk about is Jane's record. When you have nothing going for you, when you are behind in the polls, when you don't have a real plan of action or platform beyond republican talking points that have become so cliched that they literally have no meaning, then you drag your opponent through the mud. If you don't then people realize you don't know what you are talking about.

@ Jim- Asshat? Really? Asshat. Wow, just wow. I wasn't aware I was being insulted by the kid that sat in the back of my fifth grade math class and shot spit balls at the teacher. The fact is if the website was more ascetically pleasing it would be more credible. Simple as that. And I used the correct word. I am glad you agree with me that this article and this blog are "utterly irrelevant."

@The Anonymous People- A.) Jindal is already winning by an overwhelming majority, and he is a wildly popular governor. There are numbers to back that up. A simple google search reveals a plethora of polls that state his approval rating as much higher then previous governors and much higher then the national average for Governors. And if you find this blog to be more credible then an actual legitimate Newspaper then you are frankly delusional.
At the final person- going negative has been part of the political process since the birth of this nation. Peacock has gone negative in every debate, and every time he gets a mic. It was his own fault for saying he was open minded when it comes to social issues such as abortion. He said that in an interview with the Shreveport Times. As far as an example of an election that exemplifies the mud slinging that is an accepted part of politics- I would cite the election of 1800 between Jefferson and Adams- two of our most beloved founding fathers. The attacks they mounted on each other were baseless and utterly offensive, and yet they remain some of the most respected American Heroes. Jane sends out one ad that actually quotes something the other candidate said, and you cannot vote for her? Talk about close minded.

After reading your last post, I agree with Jim. You are an asshat!

rczz, or whatever your name is, I can name one thing Jane Smith did to make my life miserable. She voted for the motorcycle helmet law. Now, every time I ride my motorcycle in Louisiana, I have to wear a helmet and I'm miserable.

I'm not going into the taxes I pay because of her votes.