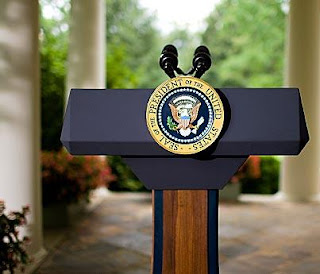 I'm in a funk about the Republican field.  I don't love any of 'em.

Chris Christie says he isn't running, to no one's great surprise.  I don't think I'd have loved him, either.  I don't care about his weight;  I think we disagree on some issues.  What I really want is to take parts of each of the candidates and make the perfect candidate.

Christie had not stepped out of the television lights today before the pundits were back to speculating on a Palin run.  Rick Perry seems to have peaked and burned so fast we hardly knew he was there.  And all the while Mittens is sitting comfortably in the lead:  a flip-flopper who says what he has to say and seems to have little conviction of anything.

A Palin entry won't change things for me.

Is this the best we can do?

One day last week, or maybe it was the week before, Rush Limbaugh suggested that Obama is going to lose so big in 2012 that Republicans ought to be putting up the most conservative candidate possible rather than some to-the-center "big tent" sort of person.

I have no idea.  My feelings about this election are about the same as the last one.  Anyone but Obama.  I would love to be able to enthusiastically get behind a candidate right now, but I can't.  I had a foot on the Perry train, but I've stepped back a little.

What's bothering me about Perry?  I'm not sure.  Maybe his poor debate performances.  He seems unprepared for the questions which I find troubling.  I was troubled by his in-state tuition position for illegals, and am still even after the reports that it amounts to so few students.  It's the principle for me.  Why should the illegal alien get preferential treatment over the impoverished student from another state who wants to come to Texas?  Oh, I've heard Perry's defense; it just doesn't convince me.

The tuition issue and the poor debate performances are enough to give me pause.  But there are other nagging things about Perry, too.  Nothing major; maybe he'll improve through the campaign, but with states now moving their primary dates up and up and up, we'll be voting before we know exactly who we're voting for.

Should Paul Ryan have run?  Maybe.  Would he have won?  Doubtful.

Should Rubio have run?  Too early?  Should he take a VP position if asked?  Should he waste his talents attending state funerals for four years?  Or eight?

Why doesn't Rick Santorum have more charisma?  But then again, Rick Santorum is almost too conservative for me, and that's going some.

Why do we expect charisma in our president, anyway?  Is that a prerequisite?

I don't have answers to any of these questions yet, even after watching all the debates so far.

I hope things clear up.

If we elect Cain, it would be a clear repudation of socialism. Otherwise, there will be the factor that we are racist.