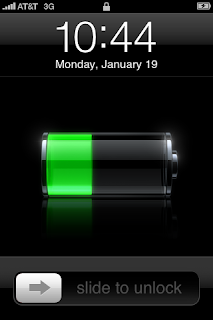 I'm calling this the recharging edition because that's what I feel like I've been doing lately.  Regular readers, if there are any of you left, know most of this already but I'll fill in the gaps.  The day after Obamacare passed (seems like an eternity ago, now), I came down with some godforsaken bronchial infection that has plagued me ever since.  Is there a connection?  Maybe!  I'm absolutely blaming Obama.

Anyway, I've spent most of my time since then going to the doctor, taking antibiotics and anti-inflamatories, drinking cough syrup like water, and trying to breathe.  Sleepless nights, missed work, the whole nine yards.  And blogging?  That's been the last thing on my mind.  And honestly, a part of me thought, "Well so what if I can't write and try to expose the Obama regime for what it is?  It's not making a difference anyway!"  I was worn out.

I'm better now.  I'm not 100% yet.  I woke up last night still coughing and unable to sleep because of it.  But I'm absolutely leaps and bounds better than I was.  And mentally I'm better, too.  Bob Belvedere left a message in a comment for me that resonated and make me feel so much better and I don't think he'll mind if I put it up. When I read it, I thought, "He gets it.  He knows where I am."  He wrote:

I think many of us of had moments like you're having now - I know I have had my share of black dog episodes these past eighteen months. But I always try to remember that we have to continue the fight because (1) we owe it to the Founders who gave us the greatest gift ever handed down from one generation to the next and (2) we owe it to the Americans as yet unborn and deserve to have their first breaths be free ones.

This fight is the right thing to do - it is our moral obligation. I have no delusions: the odds are very much stacked against us, our chances of winning are low, but how will we be able to stand before God and face him if we fail to make the effort to try and restore what He endowed us with?

Get your strength back and, in the meantime, we'll save a place for you on the ramparts.


I thank Bob for those kind words and for the encouragement.

And so, the batteries are almost fully charged, and I'm back at the keyboard, and on the ramparts.  And even though in my semi-absence a new post-editor has appeared on Blogger, which I'm not used to, and which makes things weird, let's get on with the links.  And hey, link me back because I've lost a boatload of readers over the past two weeks!  xoxoxoxo!

The Daley Gator has a word of warning for anyone going to a Tax Day Tea Party.  Left Coast Rebel chimes in on this one, too.

Bungalow Bill is planning a trip to Liverpool and has a virtual Beatles tour for you.

Gateway Pundit is the place to stop for all the latest on the tragic Polish plane crash today.  Legal Insurrection has thorough coverage, too.

Jules Crittenden expresses appropriate disgust over the handling of the Qatar diplomat with a sick sense of humor.

Stacy is having a big time in New Orleans at the SRLC.  If you come through Shreveport on the way home, I've got a couch for you, Stacy!

Pundette has a spectacular quote from Rep. Mike Pence.  My other Potluck buddy, Nice Deb, has been liveblogging SRLC.

American Power has a great post on the WikiLeaks video that came out this week.

Honestly, the one on the left does not look like Jessica Simpson at all, Trog.

Althouse comments on Nike's Tiger Woods ad.  It's despicable, to me.  I don't know whether to blame Nike, Tiger, or both of them for it, but it's, as my mother would say, just "common".  Low class.  Trash.  Earl Woods is dead.  His words are out of context.  Tiger is using this to sell Nike products?  Please.  Stop it already.

I'm very glad to see Sandy happy again and playing in the garden!

Sister Toldjah has a must-read, wonderful post on Rep. Cao and a one-on-one he had with a former constituent and the subject of race in the media.  Don't miss it.

Camp of the Saints has a great post on Stacy McCain (love the picture).

Okay, I've got to wrap it up for now.  I have to beat the Teenager to the shower this morning.  It's a gorgeous Saturday in Shreveport today and I've got things to do!  Thanks for your patience and your continued readership.  I'll do better by you this week that I've been doing lately!

Hugs and kisses!
Posted by Pat Austin Becker at 10:17 AM

I figured the puppy would catch your eye.

Glad you are feeling better and writing again. You are my source for the news and our opinions are always the same. I agree with you 100% on everything and your links are always fun...by the way, thanks for the "shout out" today!

I haven't forgotten you Pat. I still read your posts. Corndog has been resurrected as an archives at the moment. Not sure if a new post is brewing but Belvedere is a great supporter. **Super blogfriends activate** Form of: Give-a-damn!! (Get well soon Patsky. You just gotta.

Glad to see your back and getting back to full strength, slowly but surely.

Thank you for the kind words and you're welcome.

Quoted from and Linked to at:
And So It Goes In Shreveport...Again

Quoted from and Linked to at:
No Make-Up Rule 5

Thanks Pat- much obliged!