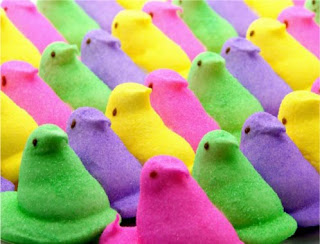 Happy Easter weekend to all! I'm still taking it easy around here as I turn the corner and get back to good health. Normally I'd be planning Easter dinner and getting the yard cleaned up but it's just not happening this year. My neighbors are all out this morning with weedeaters and blowers going, making me feel guilty. But having been sick as a dog for two weeks, I'm ignoring the yard today, Easter weekend or not. I'm on the mend, though, and there's always next year.

Being sick for two weeks kind of kicks you out of the news loop, too, although I've been trying to keep up a little bit. My blog buddies have come through like champs there, so let's get to some of the links I've been reading this week:

Doug Ross has an interesting post on the new EPA standards coming into effect which will basically push us all into "smart cars" and endanger lives. He pairs this with the photos of an aftermath of a collision involving a "smart car" and, well, it's not pretty.

Professor Jacobson offers proof that the mainstream media is still in the tank for Obama.

On a related note, Stacy McCain notes that every member of the White House press corps is working on an "inside access" book on the Obama administration.

Left Coast Rebel points out that Obama will be campaigning for Barbara Boxer in LA, which pretty much seals her fate, I guess. Donald Douglas is making plans to attend.

No Sheeples Here takes a look at Rep. Hank Johnson's response to criticism of his remark that Guam might "tip over."

Another Black Conservative notes that Dede Scozzafava is working on an election memoir but doesn't yet have a title. He offers some suggestions.

Sister Toldjah reminds us that Chris Matthews is still clueless.

Generation Patriot links to and comments on the Vanity Fair piece on General Petraeus.

Troglopundit reports that pretty much anybody with an IQ under ten can be a pirate.

Texas Rainmaker explains exactly who is running the country and why we're in the shape we're in.

Carolyn Tackett has your most obvious headline of the day.

Bob Belvedere offers some advice to the Republican establishment.

And on that note I'm going to go kick back and work on my recovery. No relapses here. While I've been sick I've been hunkered down on the couch with Stephen King's Under the Dome which clocks in at 1074 pages. I'm on page 730. Escapism. (Sam Sacks deeply panned the book here.) I figure by the time I finish it, I'll be well again.
Posted by Pat Austin Becker at 9:49 AM

Happy Easter...finally spring has come to New England, for at least this weekend.

Hope you feel well soon. Thanks again for the links!

Happy Pascha. And thanks for the link!

Glad to hear that you're well on the road to a full recovery Pat.

Thanks for the mention.

Linked to at:
Save The Environment, But Don't Save Your Arse

Pat, hope you get all better real soon. Have a lovely Easter.

Hope you enjoyed your Easter Day.

Take care of yourself.