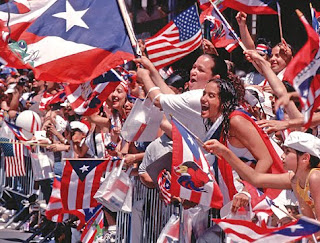 I posted over the weekend on H.R. 2499 which addresses the Puerto Rico statehood question.  I also cross-posted at Potluck.  If this is something you're following or interested in, the Potluck post has quite the discussion going with some very worthy comments.  Hit the link to check it out and feel free to keep the discussion going.

Alex Castellanos’ post discussing the Puerto Rico Democracy Act (HR 2499) correctly points out that “the principles of democracy, inclusiveness, and self-determination belong to all U.S. citizens.” What he misses, however, is the Puerto Rican government’s plan to rig their election by eliminating the commonwealth option in their next series of self-determination elections.

Puerto Ricans have rejected statehood in the last three self-determination elections, and independence is extremely unpopular. The strategy to virtually eliminate as an option for voters Puerto Rico’s current status as a commonwealth, leaving only independence and statehood as options, will all but guarantee a statehood landslide. The plan is spelled out in their legislation (pp. 7-8) and can be found here. The New Progressive Party (PNP), which is pro-statehood, controls all branches of government. There is little doubt that this bill would become law soon after the U.S. Congress passes the Puerto Rico Democracy Act.


Hot Air is also on the bandwagon following a discussion by Glenn Beck on his show:

The vote isn’t on whether to make Puerto Rico a state, it’s whether to “authorize” the Puerto Rican government to hold a popular referendum on whether it should become a state. From what I understand, though, Puerto Ricans don’t need any authorization from Congress to hold a plebiscite; they can do it any time they want. The fact that the House is nudging them — and the way that they’re nudging them — is what’s got people’s antennae up. With good reason, says the Heritage Foundation.


Congress is scheduled to take up this piece of legislation today.

I'm not seeing as much buzz about this issue as I expected.  Naomi tipped me to it last week prompting my Saturday post.  Since then I've seen a few pieces on it but not what I expected.  As of now there's no Memeorandum thread up, but maybe later.

Maybe we can work a deal, accept Puerto Rico as a state and allow us to leave.

That's because people don't understand the plurality vote in part two. That's because most people know next to nothing about Puerto Rico and they don't want to know. They may know someone here who is "Puerto Rican" and think - yeah - kinda like me so - so what? There is a huge difference between an islander and a Puerto Rican born in NY or Miami. HUGE.

Think of it the way liberals see middle America - "how is it possible you yokels have no passports and have never been out of the country? You shouldn't even be allowed to vote you are so inbred and ignorant." That's a NY Puerto Rican vs a native born islander. Worlds apart - absolutely nothing in common. But middle America likes the constitution and the way things were and they want to keep it that way and Islanders like the way they have things and want to keep it that way.

It's not America. It will not be assimilated easily. A school year there is 120 days compared to 180 federally mandated. Hell they just invalidated all birth certificates and are forcing five million plus people to apply for new ones to raise money. No state could do that unless it was to cover up for Obama's lack of one. Hawaii might ;-) jk - only - not really.