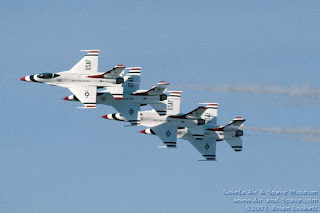 We're dealing with a little nasty weather around here this morning but it should blow out by afternoon.  Tomorrow should be gorgeous.  And that's a good thing because this is the weekend for the Defenders of Liberty Air Show at Barksdale AFB!  Steve and I always watch the Air Show from the front yard rather than deal with all the traffic on base.  Yeah, you miss some of the low-flying things, you miss the concessions, you miss some demonstrations, but the advantages are the comfort of your own home, your own cold beer, and no bathroom lines.  I can do without some of the side stuff; what I really care about is the headliner - The Thunderbirds!  I absolutely LOVE the sound as those F-16s roar overhead!  Love it!

Yesterday, we were privileged at my school to have three of The Thunderbirds come speak to us - one of the pilots and two of the crew members.  One of those crew members is a 2001 graduate of our school.  The AFB is one of the feeder districts for our school - we have a LOT of base kids and we have a huge AF-JROTC program.

New Orleans Saints quarterback Drew Brees was in town yesterday to fly with the Thunderbirds.  Apparently he's experienced - he's been up before with The Blue Angels, but never with this group before.  What a thrill that must be!  So, my question of the day - would you fly with The Thunderbirds if you got the chance?

While you're pondering that, let's get linkin':

As long as we're talking about The Thunderbirds, My Bossier has video of Drew Brees and his trip through the skies.  They pulled 9 G's five times, which as our pilot explained to us yesterday, is quite the feat!

Doug Ross has a brilliant post that you must read.  Sobering, depressing, and real, he tells it like it is.

Reaganite Republican has some thoughts on Blago's plans to subpoena Obama.

Bride of Rove has a Southern themed round-up today!  And a new car.

And on another Southern note, Wyblog tips his hat to the South.

Stacy McCain informs on a 37 year old mother of 15 who is "a victim" because nobody is helping her.  God help us.

My kind of post!  William Teach has the list of fifty beers to try before you die!  Can we start today?  Actually, I'm pretty much a Sam Adams girl these days.  Love the Boston Lager but usually I'm partaking in whatever the current Seasonal Brew is.  Of course, I always stock up on the Octoberfest.  Last year my dining room looked like a beer warehouse.  Of this list, I've had the Samuel Smith Oatmeal Stout.  I'm not interested in trying a beer called "Old Engine Oil."  But ohmigoodness they have the Sam Adams Utopias on there, which I'd love to try.  I've had Bud, Tecate and Red Stripe.  So, of that list of fifty, I've had four.  How did the Spaten beers miss the list?

Lots of folks are blogging the Arizona immigration bill and American Power is at the top of the list.  Heh!  And Fishersville Mike makes a most excellent point!  Left Coast Rebel also chimes in.

Another Black Conservative confirms what we already know about Obamacare.  Gateway Pundit confirms, as does Fausta.  And the liberals still love it.

Speaking of poetry, Red is quoting poems now.  Heh!  We're in the middle of a Words With Friends game on our iPhones and she's beating the snot out of me.  I have to get a Scrabble dictionary just to look up half the words she plays.  Sad.

Bread Upon the Waters proposes a new law I could learn to love.

Obi's Sister has the sign of the day and a heartening message.

The Daley Gator, with the headline of the day, notes Dick Cheney's endorsement of Marco Rubio in Florida.

Jules Crittendon has been covering the Michael Yon story.  Yon has, as most know, been embedded with the trips for a very long time and has done some of the most excellent reporting of our generation.  Some issues have come up and his status is changing but I expect we'll continue to hear more excellent coverage from Michael Yon.  Plus, his photographs are just stunning.  Yon's own site is here.

That should hold you for now.  Have a great weekend and if you're in my area, keep an eye on the sky for those fabulous F-16s!  And here is another kind of Thunderbirds:

You forgot to mention another great beer, which is one of several the Millstream Brewing Company in Amana, Iowa makes: Schildbrau.

We have pictures of Pat and me wiping out the Hy-Vee in Des Moines, on two occastions, of their stock of Schildbrau.

If you like a great beer, and find yourself near Amana, Iowa, do yourself a favor and visit the Millstream microbrewery.

We printed a couple of "local poets" and I have to say, behind the scenes we were lmao. There are some really bad "poets" out there. Count on reading more of it at Corndog. And thanks for playing WWF with me. Everyone else has bowed out :-(

P.S> LOVE the Thunderbirds. And the F-16 T-birds as well.

Thanks for the link, Pat- much obliged

And I DO love those Fab T-Birds... great band, just like Red sed

Thanks for the link. I love airshows, too!

And your linked of course.

James has good taste too ;-)