New Depths of Scum Dragging for the NYT 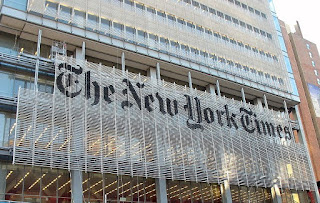 I wish I had the time this morning to sit here and dissect and dismantle this NYT editorial regarding Eric Holder's testimony yesterday and his position on the KSM trial.  The entire editorial is full of misstatements, false information and erroneously drawn conclusions.  Unfortunately, I have to go to work and can't spent a leisurely morning smacking down the Grey Lady.  But somebody will get to it.  I'd keep my eye on The Corner or Memeorandum - somebody is surely going to handle this one.

I can't resist a couple of quick notes, however.

The editorial expresses nostalgia for the good old days of the Obama administration where it seemed like he was going to be "cleaning up the mess" George Bush made with detention policies.  You know how Obama likes to grab that mop and push everyone out of the way so he can clean up things.

After the nostalgia, the editorial then blasts, among other things, "Republican fear mongering" as being the reason the KSM trip to NYC for trial failed.  There are lots of other reasons and somehow I don't call it "fear mongering" when you're pointing out verifiable truths.  For the Republicans to point out that bringing KSM to New York would be an expensive security logistical nightmare which is unnecessary given that we already have the means to try him at Guantanamo where he belongs is NOT "fear mongering."  It's called "truth", but that's something the NYT seems to have problems with.

This statement grabbed me:

Senators John McCain and Joseph Lieberman have a bill that would require the military detention and trial of anyone accused of any terrorism-related crime, including American citizens. That is the stuff of police states.

"The stuff of police states"?  Really?  Don't get me started.  As long as we're headed toward full blown socialism, NOW you're going to pick bones over "police states"?  We already have a "nanny state."  Why not?

Really, there's so much more, but I have to get ready for work.  I can't waste anymore time with the NYT this morning.
Posted by Pat Austin Becker at 5:22 AM