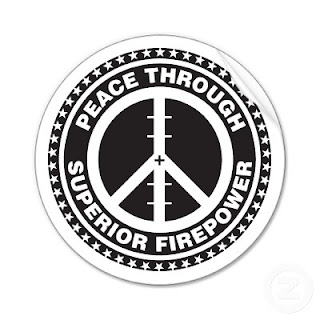 I guess Obama could have sent out engraved invitations that said "Open for attack," but that would have taken a little organization. Instead, he has simply told the world that we will not use nuclear weapons:

For the first time, the United States is explicitly committing not to use nuclear weapons against nonnuclear states that are in compliance with the Nuclear Nonproliferation Treaty, even if they attacked the United States with biological or chemical weapons or launched a crippling cyberattack.

Those threats, Mr. Obama argued, could be deterred with “a series of graded options,” a combination of old and new conventional weapons. “I’m going to preserve all the tools that are necessary in order to make sure that the American people are safe and secure,” he said in the interview in the Oval Office.

White House officials said the new strategy would include the option of reconsidering the use of nuclear retaliation against a biological attack, if the development of such weapons reached a level that made the United States vulnerable to a devastating strike.

"Graded options"....is that sort of like all those sanctions that work so well?

It sounds to me like he's simply encouraging development of chemical and biological weapons by our enemies, which is, of course, so much easier and cheaper than a nuclear program.

He will, however "reconsider" if "development of such weapons reached a level that made the United States vulnerable to a devastating strike."

This does not fill me with security.

Peace through superior firepower. THAT fills me with security.

(More at Memeorandum)
Posted by Pat Austin Becker at 5:12 AM

barack hussein obama is a fool.

Having stated the obvious, I suspect that his opponent in 2012 may have a different posture - one designed to make us safer.

I really loathe this Administration. Seriously. Worst. pResident. EVER.

I wonder which the Japs prefered, the a bomb or the carpet fire bombing? I would rather have the a bomb. A military analysis has indicated that the a bomb is much like poison gas. I has more of a psychological aspect than actual use.

Nevertheless, I can't stand this guy.

Must be your close proximity to Barksdale that inspires you, Pat. That was our unofficial motto when I was there in the '80's. Ugh, that's a long time ago! Cool logo.

Do you remember the SAC motto? "Peace is our profession."

The other, unofficial, part was "War is just a hobby."

Right, I do remember that now that you remind me.