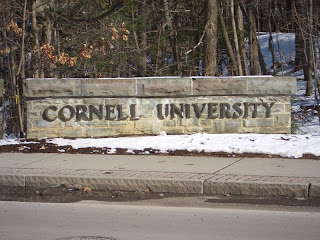 Arizona's controversial immigration bill continues to reverberate throughout the country.  At this time, at least ten other states have similar bills, or plans for one, in the works.  Protests are spread across the nation with huge demonstrations expected on Saturday, May Day, with rallies expected in more than 70 cities.  (Wonder if those protesters will be as vilified as the Tea Party crowd has been...).

Protests are cropping up on American campuses as well.  Students at Yale University protested the bill last week.  Blogger Nathan Rothstein's sister was part of the protest and he writes about the mock raid and protest here.  The Yale Daily News also wrote about it, saying:

Yesterday, members of MEChA, Jews for Justice and Fierce Advocates, along with other concerned Yale students, staged a mock raid in the Commons dining hall during peak traffic to raise awareness of the urgent seriousness of the issue. At 12:30, we released our “ICE agents,” who hounded unsuspecting students and demanded to see proof of residency. When students failed to procure the proper documents, we handed them an informative citation that explained that, if this were Arizona, they could have been detained.

At 12:45, our leading Sheriff stood on top of a chair and shouted into a megaphone, “This is a raid!” Immediately, our agents rushed to the “undocumented students” we had planted throughout the dining hall, handcuffed them, and pushed them to their knees in the center of the dining hall. One by one, we stood and explained our demonstration through a megaphone held up to our lips. We informed the community of the passage of S.B. 1070 and the subsequent multi-agency raid on our communities in Arizona. Finished, we walked handcuffed and surrounded by ICE agents down Commons’ main aisle to disappear through Morse’s closing walls.

At another Ivy League university, Cornell, students are staging their protests in crowded lecture halls.  The Cornell Daily Sun reports:

The class witnessed an example of what could occur in Arizona any day due to Senate Bill 1070, according to Natalie Ramirez ’11, co-chair of El Movimiento Estudiantil Chicano de Aztlán.


The “officers” picked out the demonstrators wearing the cardboard signs and forced them to kneel on the ground in front of the rest of the class before leading them out of the lecture hall.

Ramirez said the demonstration in Introduction to Organizational Behavior followed another in a quantum physics lecture on Wednesday.

Protesters are planning on staging more demonstrations and concentrating on crowded lecture halls for maximum exposure.

This afternoon two lawsuits were filed against the bill:

Two lawsuits were filed Thursday attacking the measure. The National Coalition of Latino Clergy and Christian Leaders filed suit in U.S. District Court in Phoenix, alleging the measure is illegal because it usurps federal immigration enforcement authority and because of concerns that the law contributes to racial profiling.  The group said on its website that it represents 20,000 churches in 34 states.

An attorney representing a Tucson police officer filed suit in U.S. District Court in Tucson to block the law.

In a Gallup poll, Americans favor the Arizona law 51% to 39% while Obama calls attempts by other states to copy the Arizona law "misguided efforts."  Because, you know, nobody can do it as well as he can.
I suppose we can expect the fallout to continue but the fact remains that Arizona is doing what the federal government failed to do and if their efforts are misguided it's nobody's fault but the Feds.
Students at Cornell and Yale might get the chance to put their money where their mouth is now that Mayor Bloomberg has invited Arizona illegals to New York; maybe some will filter over to their campuses.  He said, "if Arizona happens to be the only state to adopt the policy, the bill could actually be good for New York 'because people will come here. We make sure that we protect everybody.'"
And the cycle continues.
Posted by Pat Austin Becker at 6:29 PM

Please oh please. Let NY 'protect them'. Then these protesting ass-hats will finally learn what it's like to be third class after the illegals get preferred treatment to every service and amenity NY has to offer. Then let's see the fervor to stage raids. (massive eye-rolling commencing in 3, 2,...)

The El Movimiento students ought to know about organizational behavior. Their behavior is meant to further their organization's goal, which is control ("repatriation") of Colorado, California, Arizona, Texas, Utah, New Mexico, Oregon and parts of Washington, which is the territory known to them as Aztlán.

Aztlán doesn't quite exist as a sovereign nation yet, but something tells me Obama has already signed treaties and trade agreements with it.

I can understand the concern of these people in the Ivy League and we must sympathize with them. After all, if this measure passes, who are they going to get as a maid or to do the lawn. These bright students are certainly concerned with such matters rather than individual liberty. Otherwise, they would be for restoring the rule of law so all of us can be free.

My husband is an ICE agent and it doesn't work that way. If ICE COULD do that then you would not need local police. What they did would have been handled by the state or county not the Feds. Now. Law students? I think not if their understanding of the law is so thin.

If they were wearing endangered turtle shells or fur from a protected animal or had bombs strapped to them, yeah. The Feds might - MIGHT take an interest. The whole point these morons missed is that ICE CAN'T DO THAT because the Federal Government won't let them so the local police WILL. As soon as Obama took office workplace raids were halted if you remember Pelosi's edict.

Those kids are way too familiar with handcuffs, if you know what I mean. What.Pervs ;-)

It's astounding, but not surprising, the way the Left distorts and mis-states the Arizona law to make it into something it clearly is not.
I don't think we will ever be able to come to terms with these malignant imbeciles.

when i was a freshman at the University of SC Ronald Reagan paid us a visit and he was honored with a honorary degree. the horseshoe was packed and there was the obligatory protest crowd outside the gates, chanting "1 2 3 4 we don't want your dirty war". they were drowned out by a majority of folks chanting "USA! USA! USA!". i recall how loud that chant was and how the protesters had no recourse but to start fighting. oh yes, they got their asses kicked! this was in spring of 1984. my, how times have changed!

"...something tells me Obama has already signed treaties and trade agreements with it."

And almost certainly bowed to its leaders.

You would think that the spoiled little rich kids at Yale could find someone to read SB 1070 to them.

People who don't live in or around Arizona need to keep their ignorant opinions to themselves. Its amazing how easy it is for people to criticize things they know absolutely nothing about.

Perhaps "Mister A.G." Eric Holder could host story time for these petulant young fools, and read the 10 page document to them...invite Obama, because I am willing to bet that he has not read it either...just sayin'...