I Went to a GREAT Tea Party Today!

I carried my still-sick-self to our local Tea Party this evening and even though I'm paying the price for it right now, I'm glad I went.  What a great experience!  So inspiring!  I'll tell it in pictures and in song.  Ready?

I got there around 5; I would have arrived at 4:30 but Bossier City has train issues and I was stuck in traffic for 30 minutes.  The Tea Party didn't start until 5:30 and this was the gathering crowd at 5:00: 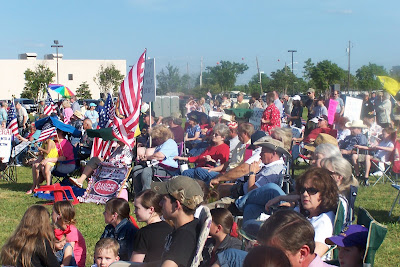 The LA Outlaws was performing and warming up the crowd with traditional patriotic songs.  I didn't see any "infiltrators" in the crowd at all.  Our Tea Party crowd had people of all walks of life.  We had families and kids in strollers: 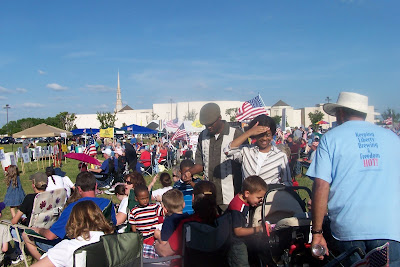 We had old folks: 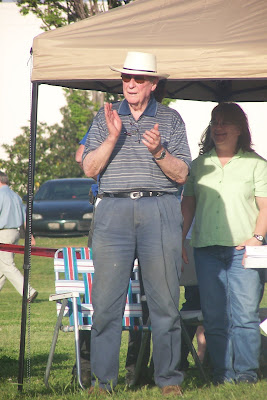 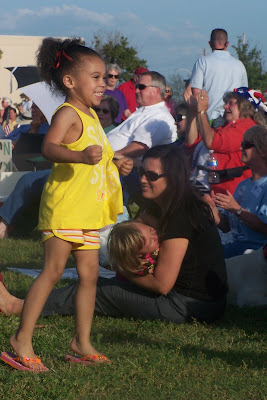 We had the media: 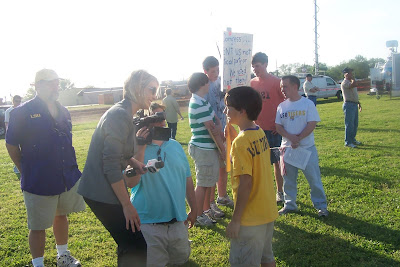 And we had patriots who stood strong on two feet: 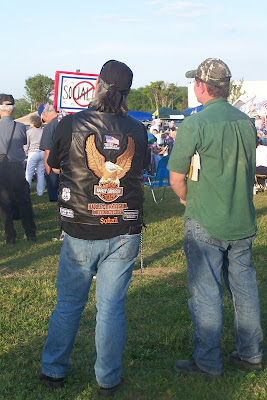 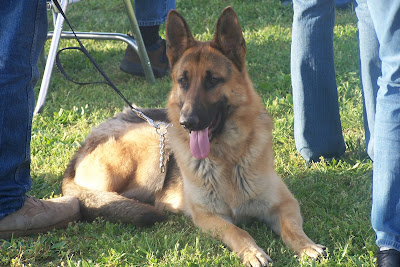 Sharon McCullar was one of the speakers.  She brought tears to my eyes; what a wonderful speaker she is!  I sought her out after her speech to tell her so.  She's a Vietnam vet, a small business owner here in Shreveport (The Glenwood Tea Room), and she has two sons currently serving as Marine snipers.  One is on his second tour in Afghanistan.  She talked about the hardships her sons and all soldiers go through, and the sacrifices they make.  She talked about one of her sons who had to get an IV in one arm while he held his weapon in the other hand.  She spoke of the hardships of one mission where the soldiers "huddled like boys at a sleepover, trying to keep warm" while constantly worrying about IEDs and "whether or not he'll come home in a flag draped casket."  Don't forget our soldiers, she reminded us.  She implored the crowd to stand up and fight for this country so that her sons and all the others like them have a country to come home to.  Sharon McCullar rocked the house and she did her sons proud today: 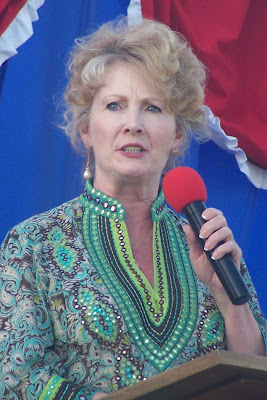 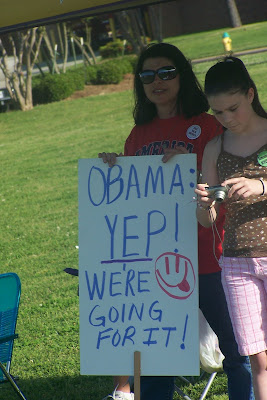 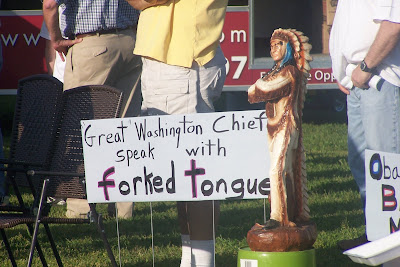 And protests without words: 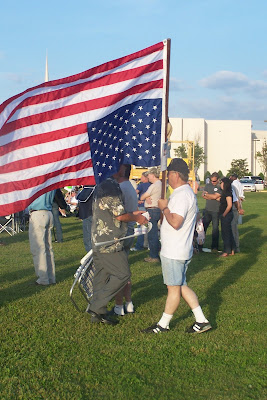 We even had a hot air balloon: 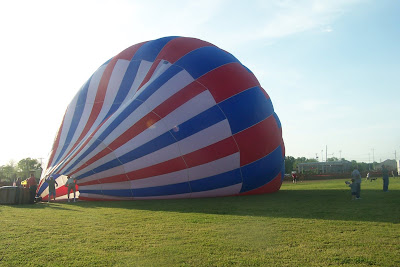 All in all it was a wonderful event and I can't praise our local organization enough.  They work so hard and are so organized.  Each event gets better and better.  I wish I was better at estimating crowd sizes but I really am not good at that.  Early on I heard a crowd estimate of 4,000 though.  I'll keep an eye on the local paper or television media and see what the experts conclude about the numbers.

One thing that strikes me about the Tea Party, at least at the events around here, are the young people.  The meme has been that the youth support Obama, "Obama has the youth vote tied up!", and he may have a share of support there, but it's not a lock.  I see more and more young people getting involved in these events.  I'll point to Kim Ebey, one of the members of our local Tea Party group; I don't know how old Kim is, but she's younger than me, so I'm calling her young.  She is TIRELESS.  She just got back from SRLC, she went to the 9/11 March in Washington, she is constantly involved and organizing and speaking out.  She has boundless energy.

I'll leave you with another lovely young face I met today:  Miss Emma Meeks.  She's eighteen years old and has been involved with the Tea Party, she said, since the beginning. 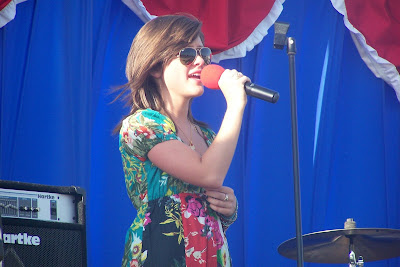 And here is Emma Meeks singing Lee Greenwood's "God Bless the U.S.A.."  Listen to Emma and then leave me a comment and tell me if you went to a Tea Party today!

I did. And I met Stacy McCain and Smitty!

Jill is lucky! And yes, I went last night. Looks like you have a lot of good patriots there in Shreveport!
WOLVERINES!