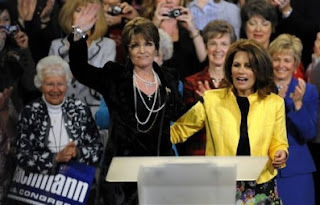 Gail Collins has penned another rambling, incoherent column for the New York Times today.  It is a perfect example of how the Times has degenerated; quite sad, really.

Collins begins what seems to be a feminist rant on female politicians which of course leads her straight to Sarah Palin and Michelle Bachmann, two powerful, dynamic women who seem to threaten Collins.  She lauds Hillary Clinton, of course, but laments the fact that it's "not the smart and steady women" who get all the attention.  That's her segue into her screed on Palin and Bachmann.

The problem is that they’re all wow and no substance. Palin is living proof that you can be popular without having to try very hard. It appears she’s never going to respond to all the pundits who urged her to go back to Alaska and read up on current events.

I'd disagree with Collins on Palin's work ethic; I think she works very hard at what she does.  She travels all over the country giving speeches and working for conservatives.  I suspect Collins would just like for Palin to go back to Alaska, period; she really could give a damn what Palin knows about current events.

Bachmann sounded like a combination of an ancient Roman matron preparing to send her sons off to die for their country, and one of those people who walk around yelling that enemies implant secret radios in their brains while they’re sleeping.

Again, Bachmann has done more for the conservative cause than many people out there and worked tirelessly against the unconstitutional, job-killing, deficit expanding behemoth that is Obamacare.

Collins is perfectly free to disagree with the politics of both women, as she clearly does.  Yet her column seems to only express personal dissatisfaction from a personality standpoint.  Bachmann and Palin have the elusive "Wow!" factor that Hillary Clinton lacks.  Is it that same Wow! factor that the media said Obama had?  Because when Collins said Palin was "The problem is that they’re all wow and no substance," I thought she was talking about Obama.

Collins closes her disjointed rant with some babbling about Carly Fiorina's Demon Sheep ad and some nonsense about Tim Pawlenty and snowshoes, but in the end she just comes of as yet another disgruntled liberal jealous of Palin and Bachmann's popularity and spunk.
Posted by Pat Austin Becker at 12:12 PM

I think the WOW factor comes from deeply held beliefs which lend intensity to their messages. Those "steady" a.k.a., boring, liberals, like Hillary, are political hacks, in it for their own aggrandizement.

In other words, Sarah and Michele are sincere. And they care. They're not posing.

So glad you're feeling better, Pat.

Excellent and trenchant observation about Obama's WOW Factor...[which was just about everything he had to offer...no experience, resume', accomplishments...just a MSM-manufactured image which evolved into a WOW! Factor. You are right about the decadence and fatuousness that now infects the once-noble [pre-1965] NYT. It is noteworthy and sad that the esteemed [and highly-paid] Editorial Page Editor, Gail Collins, missed [or ignored?] this obvious and vital point. NYT: RIP.