Are Tea Party Protesters Given Leniancy at Rallies? 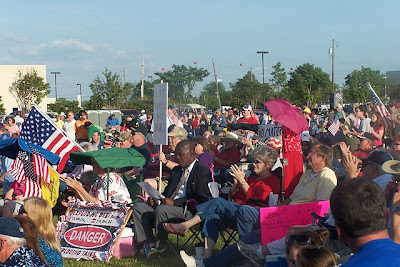 This is an interesting thought:  are Tea Party protesters given more latitude and preferential treatment than anti-war protesters?  The CSMonitor wants to know:

Tea party" activists successfully lobbied security officials in Raleigh, N.C., last Thursday to reverse a ban on carrying full-sized flagpoles and signs at a tax day rally. Antiwar protesters, however, argue that they're often not afforded such luxuries.Do tea party activists get preferential treatment from law enforcement officials? They have been able to carry guns to anti-Obama rallies, critics note, suggesting that there is a double standard.


What do you think?

I suppose it depends on where the protest is.  I am reminded of this Acorn protest in Baton Rouge, however, where protesters were not even allowed to speak to each other.

The video of the protest in New Orleans that led to the attack on Allee Bautsch and Joe Brown was frightening.  I'd have been terrified.  These people look much scarier to me than any Tea Party protesters and look to be interfering with the business of a private establishment.

Do the people in the picture above look scary to you?  Do they look like they've been given special treatment?
Posted by Pat Austin Becker at 6:41 AM

Hmmm, interesting. I wouldn't be surprised if the police are more lenient with Tea Party protesters than with radical lefties who are known to engage in violence, shout slurs and "fascist!" at the police who are just doing their job by providing security at protests, and generally have little regard for property--cars get turned over, windows broken, etc. while Tea Partiers pick up after themselves and would never dream of setting a fire in barrel or tossing a brick through a window.

Honestly, I think this is going to cause problems for BO--law enforcement knows, even if DHS tells them otherwise, that we are law abiding, upstanding citizens, not foaming at the mouth radicals bent on blowing up buildings and causing mayhem. It's going to get very interesting around the country, that's for sure. But yeah, I'd be surprised if we saw police turn up at Tea Party protests in full riot gear as they must at leftie protests (G-20, most Code Pink stuff, anti-Bush rallies, etc.). If they do, it'll be because they are forced to by the feds, not because they actually perceive a threat from us.

Besides, a law banning tall signs would only be followed by tea party protesters, while commie infiltrators would violate the ban and just be asked to leave. They don't care as long as they smear the Tea Parties.